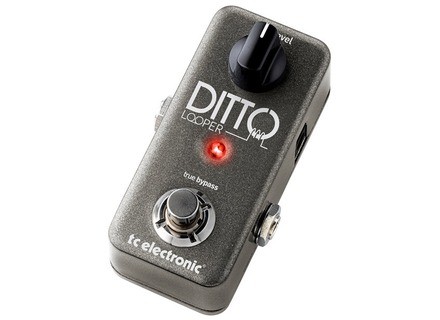 For a while now, TC Electronic has been delving into its first love by bringing us new guitar pedals at a frenetic pace. Along the lines of the Toneprint series, comes a small (very small) loop effect. The keywords here are: simplicity and effectiveness.

TC Electronic is by far, no stranger to pedals, after all that's where it all started with their famous SCF ("Stereo Chorus + Pitch Modulator & Flanger") at the end of the 70s. So it's been a "back to the roots" program for TC Electronic for the past few years now, with the TonePrint or Nova series.

The Ditto that we're testing today is a bit of an oddity when it comes to the TC catalogue.  It's neither a TonePrint nor a Nova, such as the PolyTune and PolyTune Mini. It does, howeverer use the housing from the Mini, which has its ups and downs.  We'll see about those a little later.

This isn't their frist time around the block for a "looper" either.  The Danes put out a muscle version of a delay, not too long ago, called the Flashback, with an integrated looper, but the Ditto puts the accent on simplicity, compact size and price.  It should also be mentioned here that this box is geared towards guitarists and bassists; having only one instrument input.

If you've already used a TC product you won't be surprised at the unwrapping.  It looks good with a sturdy metal chassis, the knob is solid, as it should be, the switch has a "snap" sound to it that is reassuring and the entire unit feels built for the stage. 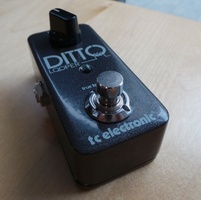 The first deception is the lack of a battery compartment: it has to be plugged in and the wall wart is not supplied.  This isn't a problem for those who have well equipped pedalboards, which usually have a single power supply for all the pedals.  For those who are purchasing their first pedal, you'll have to think about buying a classic 9 volt power supply. Guitarists with a crowded pedalboard will be happy to know that the Ditto is very compact and can fit just about anywhere. We would have preferred the choice, as is the case with the PolyTune, between a larger pedal with a battery or a smaller one requiring an external power source.  Maybe next time, who knows? 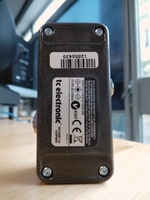 You can't get any simpler as far as connections go.  One in, one out, both using 6.35mm Jacks.  There is also a mini USB plug. This is only used for firmware updates: no import/export loop possibilities (for now anyway?).

Lastly, a single knob is used to adjust the loop volume without any effect on the direct instrument level.

Time to plug it in…

Once you have unpacked the Ditto for the first time, you'll probably need a little time to figure out what's going on here.  TC had the good idea of including a short overview of the pedal.  Pressing the switch once triggers recording, a second press, the recording stops and the loop begins to play.  A third stomp and overdub recording starts and on and on and on.....to infinity, since Ditto allows for unlimited overdubs. You just have to remember that there is only one undo/redo level. 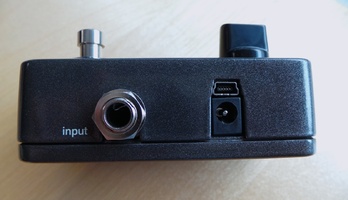 This function is accessible by holding the switch down for a couple seconds. This is where that single foot switch gets a little tricky: it’s not easy to decide exactly the moment you want to undo/redo. It’s not too much of problem when you’re playing around at home, but on stage, when you need precision, it’s another story.  It’s pretty difficult to undo and overdub at the exact end of a measure, for example. The same thing is true for stop and clear functions, which require, respectively, a "double click" and a "click + long click".  As with undo/redo, you’ll have to practice at cutting off the « read » at precisely the end of the measure.

These are the Dittos’ limitations, which won’t bother guitarists playing in front of their fireplace at home. Musicians in search of more control and timing for stage work will probably be looking for something more elaborate, but also more expensive and with a bigger footprint… 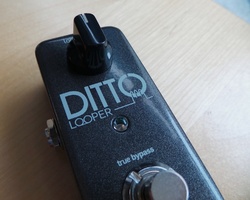 As for the sound quality, no complaints.  The Ditto offers 5 minutes of loops and records at 24bits with no compression. This should make you happy; whatever you record stays in memory even after you unplug the power supply!  We know that you “loopers” out there are also weary of input sound deterioration.  We heard no such thing during record or playback!  The sound of the guitar is always in "analog dry-through", meaning that it never passes through the loopers’ internal circuits or undergoes any ADA conversion of any kind.  The sound of your instrument will in no way be altered.

We recorded a short audio example, just for you.  You can hear the slightest difference between the direct sound and the looped sound.

I’ve got an article to finish

TC Electronic has hit another home run by simply offering the least expensive looper for guitarists on the market.  For a measly 130$ (retail price), the Ditto offers 5 minutes of loops, an unlimited number of overdubs, a solid but small chassis and a sound that respects your instrument. Its design simplicity requires a bit of a learning curve, but after a few minutes any guitarist will have down. In closing, only stage musicians will have to watch out for the undo/redo and stop/clear functions which require long clicks and double clicks, which can be tricky in situations where rhythmic precision is needed. We also regret the absence of a battery compartment and an external power supply.  For guitarists looking to have some fun at home playing around with a looper, this is the one, one, one, one..!