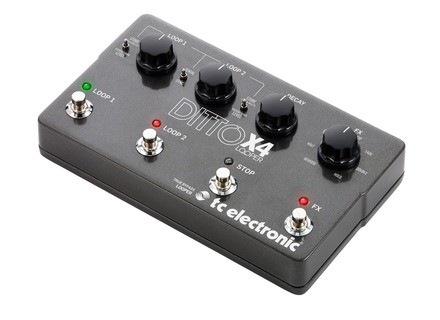 « Made for instant playing »
4

Value For Money : Correct Audience: Anyone
Buy this productView price information >
I tried it in a mixed setup : with a Flashback X4 and its looper followed by a Vox VDL 1 Looper then into Ditto.

- Couldn't be more intuitive. You choose from either serial of parallel mode, start playing and you're not even 2 minutes away from new musical ideas. All can be setup in real-time using the front knobs - perfect for people like me who can't stand menus/submenus and so on.

- the "smart" serial mode which only start loop 2 when loop 1 is over. I didn't have this option on my Vox VDL1, making it impossible to switch naturally from a verse to the chorus. With the Ditto, you just play without having to keep focused on your feet. Now, I use both chained so as to benefit from each of them's proper features.

- It looks goog (yes, it does count for me)
- Features MIDI (for possible expansions)
- 24-bit sound
- Included effects - plus they're easy to reach.
- Loop length

- No mic in (perhaps a next version with 3 loops? that would be the perfect looper)

- Impossible to save more than a single loop or wav file, so unsuitable for backings tracks

- Impossible to sync it with the other Ditto pedals that I own, so as to increase the number of loops (the Digitech Jam Man allows it: if the future Ditto models add that feature there'll be nothing left to complain about)


I long hesitated between the TC Helicon Voicelive 3, Stereo Jamman, Boss RC300 or Ditto, and finally opted for the Ditto. Here's why :

Voicelive : after watching the Youtube videos dealing with its looper feature, I decided all the manipulations that were necessary to enter and exit each mode definitely didn't suit my workflow. If I haven't been able to use a digital mulit-effect in a live situation for the past 25 years, there's no reason to expect me to manage to use a Voicelive in such a situation, especially with the stress of being on stage. The Voicelive certainly was made for a brain that doesn't get as easily saturated as mine.

Jam Man : Almost perfect - except for the fact you can't play several loops in the same time, plus each loop has to be saved before getting to the next one. Unusable outside of the studio.

Boss RC300 : Almost perfect for me - except for the MIDI sync problems often debated on forums and that still haven't been solved since the 10+ years-old RC 50. Plus, recording is 16-bit while others are in 24 (not that much of a problem to me though, especially for live).

I had recently bought a discounted VOX VDL1 but it didn't totally suit me as both loops don't automatically work in series while that was an important feature to me. I was about to sell it but adding it to the Ditto I now have a very interesting multiloop system (with effects).

This Ditto is a great purchase I made, it makes me smile the moment I start playing.
Did you find this review helpful?yesno
Cookies help us improve performance, enhance user experience and deliver our services. By using our services, you agree to our use of cookies. Find out more.