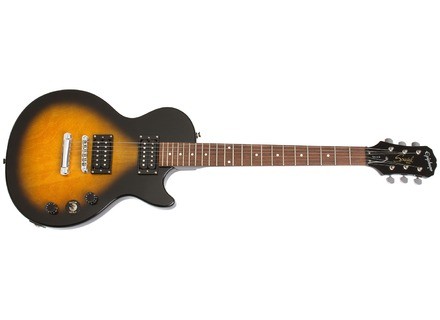 Buy this productView price information >
View other reviews for this product:
Epiphone is one of those guitar companies that basically mimics what ever Gibson guitars put out. At the phone as a whole line of models and series guitars that basically near everything that the Gibson guitar stand for and sounds like. This is a Gibson Les Paul type guitar with a different name attached to the headstock. Is a very cool looking guitar because it has a great vintage looking paint job. It really gives off that organic vintage vibe just from the paint job alone. It does carry to come back or pick ups like you would see in any other a Gibson Les Paul guitar as well as the volume control mob and tone control knob.

This is a very inexpensive guitar overall because it is the junior version of the LP series and Epiphone model series. Basically what that means at this guitar is one of the lower models of the Epiphone model spectrum. Although it does have a great tone and it creates a sounds that is inviting and more importantly is that you're not really going to break the budget when buying this guitar. The great thing about it is that it still features all of the wood combinations that you would get any other Gibson Les Paul instrument. This is very cool guitar for the money and it should be noted that it doesn't take a lot of money to get a great tone and this is one of those guitars that can do it very well.

At new you can find these guitars for one around $180. That is a steal of a price for what you're getting with his guitar. If you've ever wanted that classic Gibson Les Paul sound and you don't want to break the budget and this is probably the best option that you're ever going to fine. This is such a great sounding guitar for under $200 that it almost is a no-brainer to pick up if you are on a budget or even if you have the money but don't want to spend too much getting a particular Les Paul sound. Overall this is a great guitar and for the price is doesn't get much better than this.
Did you find this review helpful?yesno
Cookies help us improve performance, enhance user experience and deliver our services. By using our services, you agree to our use of cookies. Find out more.