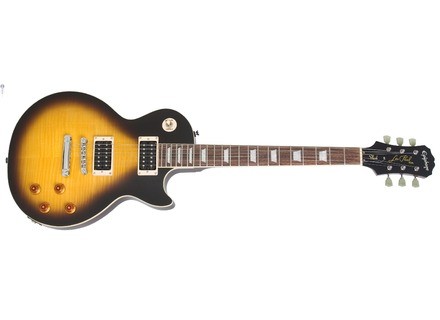 View other reviews for this product:
This is Epiphones version of the signature Slash Gibson Les Paul. Slash has been playing Les Pauls for ever and Gibson has recognized this by giving him his own Signature Model. This guitar is the Epiphone version of the Gibson Signature. The finish is similar to the Gibson model with its tobacco burst finish. It has the standard Les Paul control layout with two volume and two tone knobs. It has the standard Les Paul stop tail by LockTone and tune-o-matic bridge. Part of Slash's signature sound is his pickups. This Epiphone Slash signature comes with the same Seymour Duncan Alnico II pickups that Slash uses in his own guitars. It has a mahogany body and neck with a 22 fret rosewood fretboard. It has a set of vintage style tuners and the keys on these tuners are a mint green color to simulate age and wear.

Part of Slash's tone comes from the neck joint on his personal Les Paul. His personal Gibson Les Paul is a model that game with a larger neck joint tenon that was used in the 50s. The Epiphone Slash signature replicates this by having the large 50s style neck tenon and joint that goes all the way under the neck pickup. This large joint cant get in the way of playing on the high frets. The neck is Slash's signature neck profile which is similar to a 50s style neck so it is pretty large. This may be a problem for people with small hands. With the tune-o-matic bridge is is very easy to adjust your action so you can go as low as you like on your string action with a simple adjustment.

When you plug this into a Marshall you will instantly sound like Slash. The large neck helps a lot with the sound. A large neck puts more tension on the strings because it does not flex as much. Since there is more tension on the strings the guitars sustain is increased. This also increases the string attack giving a more punchy sound. This makes the guitar a little bit brighter than most Les Pauls. This is an accurate representation of Slash's tone.

The Epiphone Slash Les Paul accomplishes its goal in trying to get a the Slash tone on a budget that most everyone can afford. The equation was pretty simple. They got a good solid Les Paul and put a big neck on it and Slash's favorite pickups. Mission accomplished Epiphone
Did you find this review helpful?yesno
Cookies help us improve performance, enhance user experience and deliver our services. By using our services, you agree to our use of cookies. Find out more.