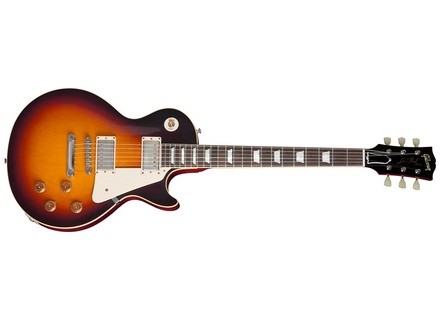 Buy this productView price information >
View other reviews for this product:
Everything is on the website.

Notable differences with Gibson USA series:
* A non weight relieved body as the traditional (adds this deep voice behind the string sound, and of course the sustain the standard or studio have not). The body is resonant and more homogeneous sounding than the trad I had (which weas already outstanding). If you pitch a string and mute it, you clearly hear the harmonics vibrating on the other strings ... this is a very good sign!

* The steel screws for the bridge and tailpiece. It allows a good transfer body vibration (Much better than a 2013 traditional or a 2012 studio I owned previously). The guitar feels more alive.

* The brass saddles that give a rounder sound and is not aggressive sounding unlike bridges Gibson USA made of porous casted zinc alloy that are none resonant ... If you really pay attention, standard, studio or even trads have a fairly aggressive sound on the treble strings and rather mushy on the bass.

* The tailpiece aluminum is supposed to add a little air (and dynamic) ...

* A long tenon glued with hide glue (traditional glue): If you put your hand under the neck joint and play the low E string, you clearly feel that it vibrates. This point was almost dead on my traditinal (which was already outstanding).

* A 50s wiring with 500kOhms log volume pots. It mean that with all the knobs turned to the maximum, the guitar sound has much clarity and is well defined. In addition, thanks to the wiring, if you turn down the volume you keep the presence so that the whole race knob is useful (even with a log knob). Your volume knob work "almost" as the preamp gain knob. Which allows to play with the switch like jimmy page:

All the more the tone knobs are super effective and can sculpt the sound without losing definition. (The mod is easy on a traditional, less a standard or studio because of the printed circuit board)

* The plain table top is magnificent. Plain but classy (with wood grain) and slightly flamed on the edges.

* The handle is a delight BUT the neck is quite sticky when new (I had the same problem on an old Heritage) ... This is the price to pay for vintage style guitars ... I am OK with it. Note that the neck is thinner than the traditional I loved but also much bigger than the 60s profile that is too thin for my taste.

* The guitar is super balanced and does not fall on the back a (a tad heavier than an ash telecaster). Clearly less than 4 kg. In comparison, the lightest traditional in the store was significantly heavier. You do not feel the need to block the body with your right arm or tilt the guitar forwards to find a balanced position. You are free to move, to express yourself, it is just TOO GOOD.
PS: Les Paul Jimmy Page 59 weighs 3.4kg, a traditional can easily weight 5Kg

* Without amplification the guitar sounds and rings. The pick-attack is super good, it is closer to a Fender (kind of) it can twang: it responds to the right hand.

without an amp:
The sound is soft, warm, balanced and dynamic. The sustain is good. To give you an idea, here is a comparison with other models:
* The sound of weight relieved studio and standard (with acoustic chambers) is quite resonant and we feel the "acoustic" side of a lighter guitar ... But it is a sound without much personality and actually quite aggressive even harsh sounding.
* The sound of the trad has a deeper voice due to a solid body with tons of sustain through a heavy body. But on the upper strings you can feel like a mid boost makes the sound to cut through. I think this is due to the bridge and strings ... It is great for a good 80s sound.
* The 58 has a softer sound, hotter, ROUND but with much better dynamics. It responds very well to the pick but the guitar is not over-bright. The guitar is very versatile in that sense. Because you can find the mid boost on the amp if you want to have a sound 80s (Slash) or have it blues-rock 60-70s ...

Amp with:
* The circuit 50s worked&nbsp; like a wonder (I've put&nbsp; simulation graph based on frequencies with 57 classic pickup of my previous traditional les paul). It is really designed to be used with an amp without a master volume. The volumes used for gain and need not sacrifice the "presence". you have a resonance peak in the 3-5 kHz whatever the positions of the knobs.
We can therefore reduce the volume and make a clean sound much easier than on a standard or trad where it quickly becomes mushy or dead sounding. The "modern" Gibson USA are made to be used with amplifiers with master volume where you look for a "sweet spot" on the amp and then fine tune with you guitar pot (hence the linear knob on standards) . One must use a footswitch foot to turn to clean sound. In short, it is just another philosophy. (There is nothing wrong with that, Clapton has a mid-boost circuit its strat ...) With the 1958 RI Les paul, put the marshall to full throttle and then control everything with your pots

* The tone knobs have an unusual response. Indeed, we do not really mutes the sound with. With a Les paul traditional, you can really kill the attack, here you fine sculpt the sound, making it more soft, more mellow without sacrificing too much attack and dynamic (Yes, You can!)

In short, this guitar is versatile in its way. It is sure that it is not as versatile as the coil-split/tap and phase inversion ... But in the classic blues-classic rock-hard rock style it is a must ...

Competitors, the traditional example is quickly confined to 80s rock and blues-jazz sounds indeed the bass is poorly defined and somewhat too mid rangy. Standard and studio are very versatile (coil-split/tap switches) but the feeling is not the same because of the aggressiveness always present.

NOTE: I have the impression that the pickups are less powerful than the 57 classics.

The standard and traditional guitars are great but there you understood the R8 is pure folly.

What I like most:
* Balance and playing comfort
* The dynamic sound hot round AND defined.
* The versatility and the circuit 50s that can do everything on the guitar.
* The VOS finish with rusty hardware limits: it is vintage

What I like least:
* The neck that sticks&nbsp; ... rhhrhrh ... If you do not take the GLOSS finish I think that the problem does not long.
* The idea that the red finish will bleed into the binding as the originals: (
* I am freaking out a little bit how it will fade like the real ones... This looks like a little lottery ...

As Jean Paul said, do not try this guitar... Because if you do, you're done.
See the source
Did you find this review helpful?yesno
Cookies help us improve performance, enhance user experience and deliver our services. By using our services, you agree to our use of cookies. Find out more.