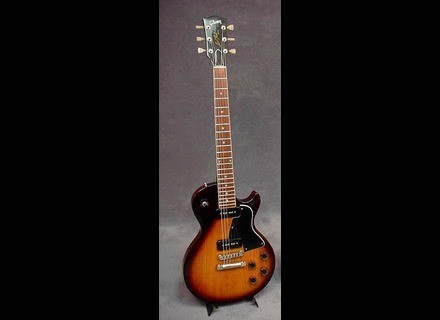 View other reviews for this product:
Les Paul Juniors aren't really for everyone, and I'm not sure I totally jive with them. This was a reissue model that was released during 1977, and it was a copy of the 1955 model that came out long ago. The guitar features a mahogany body, mahogany neck with a bound rosewood fretboard, 22 frets, dot inlays, pickguard, binding, hard tail bridge, two humbuckers, two volumes, two tones and a three way switch.

The guitar had a pretty decent setup on it, but it had some worn frets and was banged around a bit. Considering that this guitar is pretty old, it's no real surprise. The frets had your standard grooves in them that occur from years and years of playing. The nut itself was actually new, so no issues there. The binding itself was aged nicely, but I noticed that it was starting to come off around the edges, and that'll be a bit of an expensive repair. It's hard to fault it too much considering how old it was, but expect some issues when you buy guitars this old.

The guitar sounds pretty cool with the P90s in it. Keep in mind that this guitar is made more for old school classic rock more than anything else, so its pickups seem to be designed around that. The bridge pickup was pretty low output, but it got a really nice P90 tone, especially through a cranked Marshall. I didn't get to try it out through one of the NMV Plexis because it would be too loud, but it sounded good through the DSL. The neck is cool for a neat clean tone that you don't normally hear, and it can do some pretty cool low gain leads, but I was struggling a bit due to its lower output.

These guitars can be really cool for certain styles, and having one around makes them really useful in the studio. However, I don't think I could ever use this on stage due to the fact that it's a bit limited in the overall tone, I've found. It can do that one tone really great, but that's about it.
Did you find this review helpful?yesno