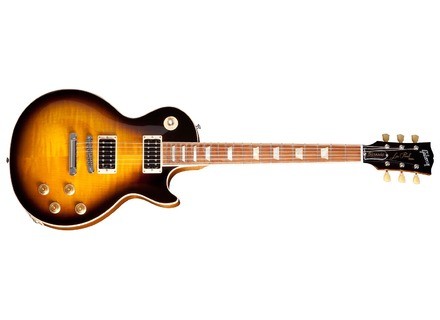 Buy this productView price information >
View other reviews for this product:
This was the first Gibson I ever personally owned. It's no different from the Standard other than it has some aged inlays and the 500T/496R pickups. Everything else about this is basically the same. For some reason, people tend to avoid these guitars and go for the Standards. They claim that the Standards are higher quality, but I'm not sure I believe that.

I quickly found out that I'm not a fan of the Gibson feel. After playing strats all my life, the Les Paul felt really foreign. It was very back heavy and a pain to sit down and play with. The neck was always sticky on my guitar, even after treatments of 0000 steel wool. The frets also weren't perfectly level, so achieving the action I wanted was nearly impossible. However, I played one in the store, and it was much better. Because of that, I'm not giving it too hard of a hit on utilization.

The 500T is a really ripping pickup, and it sounds great in the bridge. The 496R is too bright for my tastes, but that can be easily fixed. The biggest problem is that I think these guitars have 300k pots. It's like the volume doesn't go up enough or something. Once you replace the pots, the guitar really seems to come alive. Clean tones are decent, mid gain tones are good and distorted tones sound really crushing with the Classic. The fact that it came with 300k pots makes me rate it down a bit. I mean, that's just ridiculous. These guitars should come with 500k pots.

If you can't afford the Traditional, I recommend checking out the Classic. It's a bit more geared towards metal heads given the 500T pickup, and it tends to go for a bit less than the Standard. It's hard to recommend the current Standards given that they're now chambered. The Classic is weight relieved (just like all Gibsons since the 80s), but it still weighed a ton and sounded huge. If weigh tis a problem, you might want to look to an ESP Eclipse, but it won't sound the same.
Did you find this review helpful?yesno