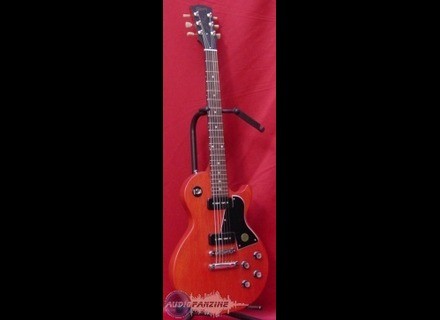 View other reviews for this product:
Gibson made in United States of course.
Mahogany body only (no table in bomb stocky, like all Les Paul Special), mahogany neck, rosewood fingerboard 22 frets, 2 P90 pickups, Tune-O-Matic, Stop-Bar tailpiece.

Mine is finished in Worn White, who is the image of the guitar is to say trs roots. Some n'apprcieront not because you feel that there is no varnish and that just scratches the paint brush to the old rotten. Finish carrment use (I personally loves not finish this, but hey, considering the price of the guitar, I have not made the difficult).

My rating will focus on the fact that it is a Les Paul Special. It is empty at the level of CHARACTERISTICS is far less versatile and less ergonomic than a Super Start or other guitar in the style.

The handle is typical, it is round, rather pais, has held well in hand. The abscence of rel varnish that the handle is a bit rpeux, but hey, was added to the ct Rock n 'Roll, where you have to fight with his guitar.

Otherwise, the guitar is super lgre and book with a Gig-Bag.

This is my scratch Premire P90 pickups, and I must say that I am not due to a hair.

In the clear: the guys who swear not clean sounds strata can go to bed. The clarity is magnificent in the bass are large and strong, the highs are incredibly rich and hyper Defines mdiums. The sound overall is trspchu (especially acute with the microphone), a large, trs trsrsonant (sustain super rich). Incredible, I had never heard such beautiful sounds clear.

In the crunch: Hyper Rock n 'Roll. It surly (without being aggressive in the wrong sense) while both super hot. There's the sustain, and precision of a vintage sound cry. Fans of the Who, the Eagles and more generally the Rock of the 70 apprcieront normment, the same as the fans of Punk. When Blues fans is that of happiness, his expressive trs. This guitar a me.

In heavy saturation: I have a head which saturates normment (Hughes and Kettner Warp X), and is far from being ridiculous for single coils. The bass is powerful and harmonics as a failed fuse (limit is impossible to screw up a lot so one easily). It's easy to play, prcis hot. It just needs a little heavy and greasy, but overall play Metal with a Les Paul Special P90, it is feasible.

In short: a guitar super versatile, comfortable in all types of sounds (even if its areas of prdilection are the Blues and Rock).

Gibson has always paid dearly for the trs dtails finish, and a Manir all that the demand for labor (table bomb sunburst finish, ...). With this LP, we return a basic concept, trs roots, no frills. Rsultat a scratching that sounds like it's not allowed, but for once, a trsdmocratique price (just over 700 euros).
So it's certainly not the most beautiful Les Paul, but sounds (and I am also one of the many guitarists who prfre a Les Paul Special with P90 pickups a Standard). The Specials have always t Submitted as both economic MODELS, low-end's standards, but personal, its level, there's no photo, I have a weakness for these Specials. They are less Chres because they score less build, level finish.

Gibson really put, for once, a tariff compltement justification (fates calculation, counting the price of wood, microphones, the fittings, the Gig-Bag and ropes, we arrive at almost price of the guitar). That's a rare Les Paul with whom one does not enfl.

In addition, the P90 is really that the microphones oversights t (y 'than for a simple Fender), while it is without doubt the best single microphone.

Coupled at the top violin, the guitar that have trs little guitar: a me.
So even if the finish is not super russi, we have for the price of a mid-range guitar, guitar.
See the source
Did you find this review helpful?yesno
Cookies help us improve performance, enhance user experience and deliver our services. By using our services, you agree to our use of cookies. Find out more.