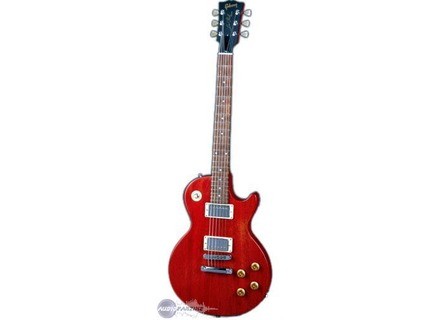 View other reviews for this product:
The Faded series sometimes gets looked down upon because of their cheaper price, but I find them to be some really great playing guitars, especially considering that you don't need to pay full price to get that Les Paul tone. The guitar features a mahogany body, mahogany neck with a rosewood fretboard, 22 frets, trapezoid inlays, no pickguard, no binding, hard tail bridge, two humbuckers, two volumes, two tones and a three way switch.

This is a stripped down Les Paul, and you could kinda tell. The frets themselves weren't too bad in terms of height. I didn't have any issues with low frets causing the guitar to fret out with some decent action. However, the ends were a bit sharp in some parts. Be sure to pay attention to that if you decide to buy one. The nut was cut fine, but there are quite a few out there that have issues with the nuts being cut improperly causing some tuning stability issues. This is pretty apparent once you start bending and notice the guitar going out of tune all of the time. Aside from that, the guitar is put together nicely. The weight wasn't bad, and that was pretty nice as some of these can get heavy.

The guitar sounds a bit meatier than the normal Les Paul. The biggest tonal difference you'll experience is that this is a bit darker sounding than a normal Les Paul. The reason is due to the lack of the maple top. The maple adds some extra bite to the overall sound, and it can be a good or bad thing depending on what your'e going for. Tonally, these are a bit closer to the Explorers, SGs and Vs than the Les Pauls. The pickups in this are average, but I'm not a huge fan of them. I usually replace them with something like the Seymour Duncan JB in the bridge and 59 in the neck.

Normally, I'd recommend buying stuff used on eBay. However, there are some issues with these regarding fretwork and improperly cut nuts, so you're better off buying one in the store that you can physically inspect. The guitars aren't 100% in terms of that Les Paul tone, but they sound great, and for the price they go for, they're definitely worth it.
Did you find this review helpful?yesno