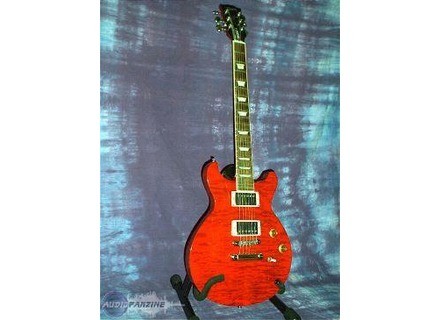 View other reviews for this product:
See reviews prcdents. Mine was in 1998, first year of production. As usual with Gibson, the first models are irrprochables (that is after when it comes success, that is a gte ...).
As this model was a little risk taking, Gibson has put on the wood quality: the maple table, mahogany body and neck, and rosewood are the key of any beauty .dropoff window Usually we do not find this quality than on custom shop models.

I had the opportunity to test DC outputs recently: times have changed! (Unless apprcier wooden crate color keys ...)

The neck is modern, fine enough to make life easier for small hands, wide enough for a clean game. The frets are wide and flat: it is not the top for the correctness (rglage in compulsory luthier), by contrast, legatos out alone.
The access to acute is guessed just by looking at the photo ... We can make a barr on the 20th fret as who laughs.
Stomach chamfer is a real plus (and this is a thin that crit!). The guitar wife snugly to the chest and right hand naturally falls over the ropes.
The guitar as provided tonal bedrooms (PROCD dsormais gnralis all Paul Standard), it is very, trslgre. Level sensations, has a low recall almost Hfner.
Easily obtained sound of a Les Paul (and for good reason!). Some regret the unique pair of volume and tonality. What you lose in subtlety (and that little prs nobody hears in concert!), It makes up for in rapidity. And it is the first Les Paul that allows violining.
The handle almost completely out of the body, allows thundering vibrato: a plated agreement around the first five boxes can be vibr like a Fender! Users familiar with the Telecaster stuff. on the other hand, try doing that with a '58 Reissue LP and its handle "baseball bat" ...

In dbranch can clearly hear the tonal chambers: the guitar trunk!
This instrument is a nervous, angry, destiny to rock, blues and country music. The rhythmic tear, attacks are sharp and the sound of trickling harmonics. The neck pickup, placed lower because of the 24 cases, DLivre sound a little prcis and less fat than the usual Paul.
The clean sounds are amazingly beautiful: no need to prolong compressor notes or roll arpges Danny Gatton.
The intermediary position possde lot of charm with this "little" its bounding the period Page "Physical Graffiti".
The neck pickup is warm and juicy. Again, even clean sounds have something singing.
The race is particularly rgulire potentiometers, which makes them very usable. With a good amp (lamps and ractif), we can very easily go from a slightly dirty a lead sound without changing channel (very big advantage: the result is more musical).

I possde this guitar for three years. I bought it for sound (endless sustain, percussive attack, etc.), reasonable price given the quality of the wood and the ergonomic advantages (weight, natural vibrato, simplicity of the electronics) .dropoff window
His qualitprix report is still good but the Americans are beginning to wake up: the first series factory 1998 2001 starts very Seriously search (https://www.mylespaul.com/forums/gibson-les-pauls/54785-thoughts-gibson-les-paul-dc-standard-plus.html).

Try it if you like (s) sound (s) Gibson (Obviously, this is not the same as Slash but hey, that's playing in front of the mirror of his cabinet or to an audience? <img class="smiley" src="/images/audiofanzine/interface/smileys/icon_wink.gif" alt="wink" /> ) .dropoff Window
See the source
Did you find this review helpful?yesno
Cookies help us improve performance, enhance user experience and deliver our services. By using our services, you agree to our use of cookies. Find out more.