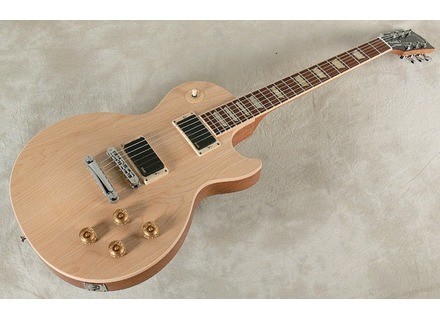 View other reviews for this product:
Gibson has a couple of runs of guitars called the Raw Power series. This is by far the better of the two. The other Raw Power series featured guitars made entirely out of Maple and they all sounded and looked weird. This is a real Raw Power guitar. It has no finish and is equipped with a set of screaming active pickups. This is the Gibson Raw Power standard. You get a mahogany body with a maple top. The neck is a mahogany set neck with a rosewood fretboard. The guitar is pretty standard apart from the active EMG pickups. This guitar has the classic Zakk Wylde set. This set is used by everyone not only Zakk. You get the 81 in the bridge and the 85 in the neck position. This is a great set for any kind of heavy music. The lack of finish on this guitar means the wood can really breathe. You get way more natural tone this way.

The playability on this guitar is great. The lack of a sticky glossy finish on the guitar means everything feels super fast and slick. Other than this lack of finish it plays like a normal Les Paul standard. The fretwork is good due to the Plek process Gibson uses. They put the guitar into a machine and it uses a set of lasers to level the frets more accurately than any human could. You get typical Les Paul upper fret access which is not great but people are use to it by now. The neck is pretty beefy as well. Because the EMG's need a 9v battery to operate Gibson includes a little compartment on the control cavity plate that lets you change the battery without having to take off the whole plate.

You get ripping tone with the EMG's in this guitar. The Zakk Wylde EMG set isnt anything special. Its not like other signature EMG sets. It is just named after him because he has been using them the longest. It is just a standard set with an 81 in the bridge and an 85 in the neck. You see this set in a ton of guitars and for good reason. The set sounds great for metal and heavy music. The 81 in the bridge is great for heavy riffs and low tunings. It has a nice high end gain sound so it doesnt get muddy. It is razor sharp in its voicing but has nice low end so it sounds sound thin at all. The 85 in the neck is a lot smoother than the 81. It has a bit more low end and a smoothed out high end so when you are playing leads they come out nice and smooth instead of harsh. If you want better cleans you can install a 60 in the neck position. That EMG has a good clean tone. You can also do the 18v mod and run the pickups on two batteries instead of one which gives you more headroom and a more organic tone overall.

This is a great Gibson guitar so of course it is discontinued. This guitar is pretty simple either way. It is just a standard with a set of EMG's and a natural finish. You get a great metal tone with this guitar. More so than on Gibsons "metal" guitars which usually come with stock passive Gibson pickups. If you can get a good deal on one of these you should take it but it is not a hard guitar to make yourself with just a normal Les Paul and a set of EMG's.
Did you find this review helpful?yesno