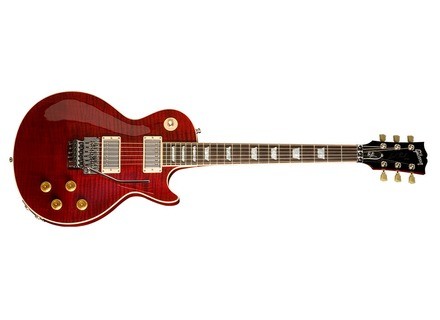 View other reviews for this product:
This variant of the Gibson Les Paul Axcess was designed for RUSH guitarist Alex Lifeson, so it has some tweaks on the original version. The most notable difference between this one and the original Axcess is that this model runs stereo using two output "Life-O-Sound" jacks to toggle between the magnetic pickups and piezo pickups. There are a few other unique features overall, but for the most part the core features of a mahogany body and neck, rosewood fretboard, flamed top, Floyd Rose Tremolo, dual humbuckers with coil taps, 22 frets and two beautiful Gibson stain finishes. It is made in the good ol' USA in Gibson's Custom Shop, renowned for their quality and attention to detail.

This guitar solves a lot of the problems I had with other Les Pauls like the Standard or Traditional that were clunky and hard to get around. The Axcess is quite easy to play due to a few different factors. Firstly it's very light in weight and it sits on the body a little bit easier than a typical LP. Also, the contouring on the body provides a WELCOME change in the design of the Les Paul. Finally upper fret access is unrestricted, AND no longer does the back of the guitar dig into my ribs! Combine that with all the versatility that this guitar offers with it's tremolo, piezo, custom wound humbuckers and coil splitting, and you have a true modern warrior's Les Paul!

I've tried the Axcess models through various different American and British voiced amps. The cleans on this guitar are great. I'm not normally a huge fan of the cleans on a Les Paul unless I'm using more of a jazzier neck pickup sound. However, using the coil taps on this guitar really allowed me to tap into some inner Tele and Strat type sounds, which instantly made things more appealing. The dirty sounds were great as to be expected. I've always liked Alex Lifeson's tone in RUSH and this guitar certainly has great tone. Chords respond with a thickness and attack that you'd expect from a Les Paul, and lead lines have near endless sustain, especially when mixed with usage of the Floyd Rose. The coil tap gives things a bit of a brighter sound that works for jangly Fender-y textures. Also, having the piezo onboard is great too because it allows for some of those quasi-acoustic tones to really shine through.

All in all I feel that the Gibson Les Paul Axcess Alex Lifeson is a true winner. It takes nearly every feature I don't like about Les Pauls and remedies it. The tones are stellar and you can go through many styles with ease. It's a fairly expensive guitar (about $6,000 new) but it's definitely well worth it. If you get a chance to check one out, do so by all means! It's truly the definition of a modern Les Paul.
Did you find this review helpful?yesno
Cookies help us improve performance, enhance user experience and deliver our services. By using our services, you agree to our use of cookies. Find out more.