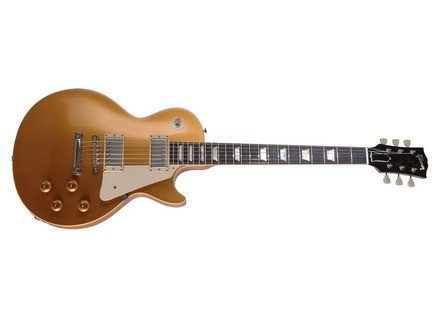 View other reviews for this product:
The Custom Gold top guitars are fantastic instruments but they do stretch of the large amount of money for their price point. These guitars are outrageously expensive and the new little ones don't really hold up to the older models. I've played a number of Gibson custom shop Les Paul's and many of them just don't carry that same weight and feel that you found in many of the vintage style guitars from Gibson. Although this is a great guitar and it does carry that same tone that you would find in many of the older guitars but it just doesn't have that feel that some of the 70s and early 80s guitars had in my opinion.


This guitar features to humbucking pickups two volume control knobs and two tone control knobs as well as a pickup selector. There isn't whole lot features that come with this guitar other than it's simply a six string guitar that has a nice warm juicy tone.


This guitar features mahogany wood and the body in the back as well as rosewood fretboard. The nice pearl block inlays give this axe a great-looking appearance. This is a historic 1957 to reissue goal top and it looks just as good as it sounds. Some of these guitars can vary from feel so I suggest playing a few of the Gibson custom shops and getting an understanding of what you're getting into. Overall this is going to sound great and pretty much any musical setting that you put it.


These guitars fetch for $3000 new, but you can certainly find them in many used sections of classifieds or auction sites. If you have the means to spend several thousand dollars for a guitar that I suggest looking around and finding an older used Gibson goal top because it'll serve you right to play a few and get the right perfect one that matches your playing style.
Did you find this review helpful?yesno
Cookies help us improve performance, enhance user experience and deliver our services. By using our services, you agree to our use of cookies. Find out more.