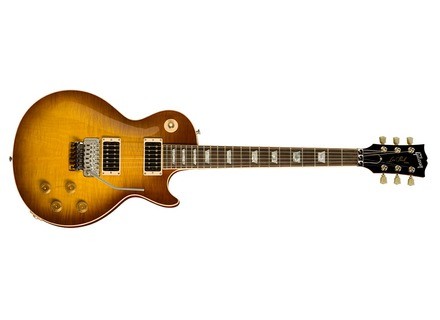 View other reviews for this product:
This is the Les Paul a lot of people were waiting for a few years ago but to me I still have some problems with it. Back in the day you saw some big name players that had Les Pauls that looked just like this. And everyone wanted one. Les Paul with a floyd rose and a nice neck joint. They were just super rare custom jobs. Now you can finally get one from Gibson with their perfect timing a few years after everyone was begging for one. The Les Paul Axcess is a big update to the Les Paul design. From pictures it may just look like a Les Paul with a Floyd Rose but when you play it the guitar feels way different than any Les Paul you have played. The guitar has a way thinner body that most Les Pauls I thought this was cool until I saw that it was still chambered. Why would you need a super thin body and chambering? Do all Les Paul players have bad backs from playing Les Pauls all their life? I would rather have just the thin body. A thin body is not as bad as turning the inside wood into swiss cheese like they do. There have been thin bodied Gibsons for ages and they were never heavy. Im just waiting for Gibson to start chambering necks now. The neck is mahogany also with a rosewood fretboard with 22 frets. The neck join is very nice and highly carved out. I dont know why they dont just do this on all their guitars. If they can do it on this one why not all the rest. You get the normal maple top but there you see the biggest difference. This guitar has a Floyd Rose! Les Paul traditionalists everywhere are having heart attacks. With the Floyd Rose comes a locking tune for tuning stability. It has 496 and 498 pickups which are pretty disappointing. I would expect Classic 57s in a guitar that cost 3k. The controls are a bit more modern too. It has two volume and two tone controls with a splittable bridge pickup for series and parallel. I would have just put some coil splits on it I dont know many people who split series and parallel and actually use it.

This guitar plays great for a Les Paul. The neck joint is a huge improvement over what Les Pauls have had for 50 years. Again why dont they just do this across the board? The thin body is a bit more comfortable but I still wonder why it is still weight relived. How light does this guitar need to be. There are non chambered custom shop Les Pauls that are plenty light. Its like Gibson is chambering stuff to hide their poor wood choice or something. The Floyd Rose is a nice touch being an original Floyd Rose. The locking nut means your Les Paul will stay in tune for once.

Its pretty crazy that this guitar has pretty much the same pickups as a Les Paul studio. The tone from these pickups are pretty mediocre. The pickups are standard Gibson pickups, but they seem to work for most. The bridge pickup has some nice bite to it, and it has some decent output. I find they lack the character for heavy metal, but they can work for 80s metal. The neck is a bit too bright for me. I like a thick, fat sounding neck tone, and these generally have a bit too much bite for me. However, they're clean sounding, and that works awesome for clean tones. If they are making a non traditional Les Paul why put the traditionally mediocre pickups in it. When are they going to start putting their GEM active pickups in more than 2 guitars. Come on Gibson you take one step forward and two steps back.

This guitar would have been perfect if it came out about 10 years ago. People have moved on since then. You can get an ESP Eclipse with a Floyd Rose for half the price. And it has an ebony fretboard and non swiss cheese body plus active pickups. If you were one of the people who wanted a Floyd Rose Les Paul back in the day here is your chance. There are other choices out there if you are looking for a guitar with the same specs. The price on this guitar isnt great either. You are paying for the name on the headstock with this one.
Did you find this review helpful?yesno
Cookies help us improve performance, enhance user experience and deliver our services. By using our services, you agree to our use of cookies. Find out more.