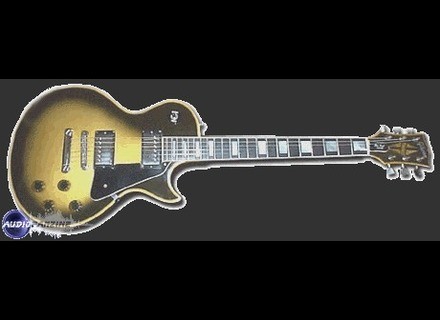 View other reviews for this product:
This is a guitar that was manufactured in the United States between 1978 & 1981 (or 2, according to sources).
It's a 22 frets, 2 humbuckers pickups are his Gibson and she is a bridge team Tube-O-Matic (like most Les Paul). There is a knob of a Tone & volume knob for each pickup (or 4 knobs) and can switch from one another by a slecteur (the famous Rhythm / Trebble) which allows also to combine both at the same time.
His body and the handle are solid mahogany, while the key is in the table bne & Saddle is bomb. This has taken dernire rectangular pearl of great effect.
The beautiful color if CHARACTERISTICS of his body that even earned him the name (silverburst in honor of the sunburst), which is a DGRAD of the money finally to black. All the hardware is also money. Finally, the edges of the body like the neck of the head & are ivory ....

The handle (among others) is the ball. Everything has been said about these guitars. There is nothing more (and many dj !!!!) a custom of this era if not its color.
CHAC is more acute in qu'ais.
Obviously, the fact that it is solid mahogany n'allge not weight but is not a parka and besides, it has not asked (although parker either tr s good guitars). Its ergonomics are so good that its shape is one of the copy since the invention of the guitar electric.
the question "do you get a good sound easily ?...", I think it is superfluous (ah questionnaires standarts ...). Obviously ... It is a Les Paul Custom ...

It's big, fat, the Gibson Les Paul Custom if you prfrez. It should be tons of DIFFERENT styles but especially for big sound. With Marshall and other Mesa, a ring of fire of God.

It must now five years since I bought and I love it. It's a Rolls. Mine dates from 1980. I purchase but it is super state. I read that the money became verdtre after a moment ... I may be colorblind but mine is just as flashy.
I tried the guitar before the fall for it. The choice of a guitar, it's also got a case (other than financial, although sr). If we are "some" millions who drool before the MODEL is that there is a reason, despite the price.
And finally, yes, yes, yes, yes, yes, yes, yes, I would do without this choice hsiter
See the source
Did you find this review helpful?yesno
Cookies help us improve performance, enhance user experience and deliver our services. By using our services, you agree to our use of cookies. Find out more.