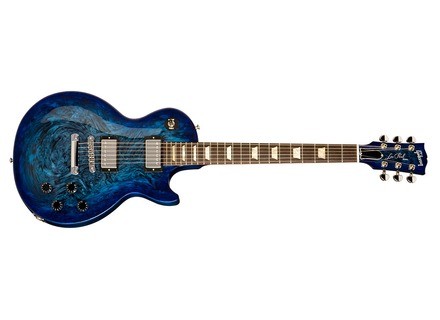 The guitar was produced to commemorate the flood victims of the good people in Nashville back in 2010. This is a guitar that was only set for a limited run and once they were out they were gone. So if you weren't able to pick one up then it will be a hard number to find since they only made certain amount of these guitars. These guitars were basically the same specs as any other Gibson Les Paul Studio that they have been producing. the visible change would be the blue swirl paint job and certainly the cost is a little higher. I would expect some of the money made would go to the victims but I cannot confirm that. These are good sounding guitars and just like every other studio Gibson Les Paul it sound like a LP.

These guitars are no longer in production. You will have to find them on the used market somewhere. They are cool looking guitars if you are into the swirl paint job. If you are a traditionalist in terms of how Gibson Les Paul's look then this guitar will not be up your alley. I would recommend seeing this guitar in person before you buy just in case you don't like the look of the swirl.
Did you find this review helpful?yesno