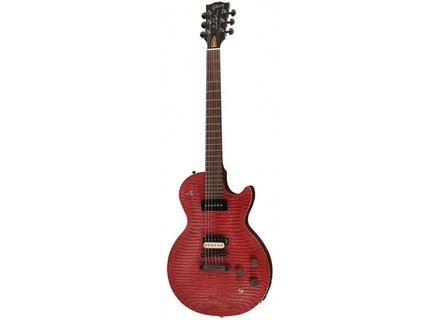 « Stripped down but still cool »
4

View other reviews for this product:
Gibson released the BFG model for those who want to have a humbucker and P90 guitar in one, along with those who don't need a bunch of the fancy options that some of the other Les Pauls offer. The guitar features a mahogany body with a maple top, mahogany neck with a rosewood fretboard, 22 frets, no inlays, pickguard, binding, hard tail bridge, two humbuckers, two volumes, one tone, one kill switch and a three way switch.

The guitar was pretty solid overall. The frets themselves were nicely crowned, although the could have been leveled a touch better. I'm not sure if there was a slight hump in the neck or if it was the frets themselves not being perfectly level, but I was having some issues in the middle of the fretboard that the truss rod couldn't dial out. The nut on this was cut nicely, so no issues there. Upper fret access is the same as every other Les Paul out there in that it's nothing to write home about.

This pickup combination is a really cool marriage of pickups. In the one corner, you have the humbucker. It delivers that fat sound with tons of overdriven bite to it. I actually find that these don't have enough output and clarity for me, but I've never been a real huge fan of stock Gibson pickups to begin with, so take that with a grain of salt. The P90 in the neck is awesome for those fat, bubbly lead tones that absolutely scream. It's like a really fat single coil, and it just rips.

These are real cool guitars, and they're probably better buys than the Gary Moore models simply because they tend to be cheaper. However, the Gary Moore models are more consistent and tend to sound better, so it's a trade off between the two. Either way, see if you can try some out and see if you like the P90.
Did you find this review helpful?yesno