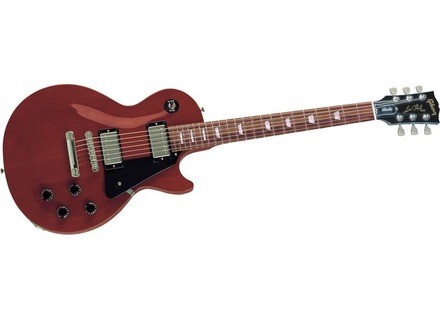 View other reviews for this product:
Purchased in November 2001 for 1500 euros.
The only notable feature is that the studio does not have a maple top (reserved to the standard, the deluxeetc ...)
For the rest it is a les paul, one likes or dislikes.
Nothing to say about the quality, apart from the original hardcase who seemed more cheap than the fender cases.
Cherry red version.
The handle is not a autoraute but I have another guitar solos.

I should mention here that I have kept for 3 days at the store, they were kind enough to take me back. I took a telecaster 52 'instead.
Today I rather regret not having kept, but hey I had a yamaha sg 1000 that sounded better.
The weight, I did not find huge NRJ my telecaster ash is heavier ...
The only problem of this guitar is that the sound was too specific too modern.

Who listen to many dique sixties (faces etc ...), I had a preconceived idea of ​​his Gibson.
I was looking in the studio a fat, fluffy, deaf. The studio is the opposite of that, the sound is brilliant, accurate, balanced, in a word: modern. Big disappointment compared to my expectations, I believe that we must invest in a standard for "the sound" les paul.
To my taste, yamaha sg 1000 (1973) sounded more Gibson.
I think the studio are made for modern rock, hard, pop than blues.
It is ideal in this register but a little dirty or mushy sound, special equipped with p90 (I got one in the year 80) seems more suitable although less defined fat saturation.

In conclusion, I think the studio is aptly named, clear and precise, it will do for very punchy and clean saturations, short for Studio rods ...
The Lespaul range is so vast that suited blues and vintage rock find their "weapon" easy but it will by no means the Studio.
In its modern registry is unbeatable but for me it does not sound that we liked so much disk Robin trower ...
Noted that guitar would be subjective, because pure matter of taste, for my part I found no personality (for a Gibson ..)
See the source
Did you find this review helpful?yesno
Cookies help us improve performance, enhance user experience and deliver our services. By using our services, you agree to our use of cookies. Find out more.