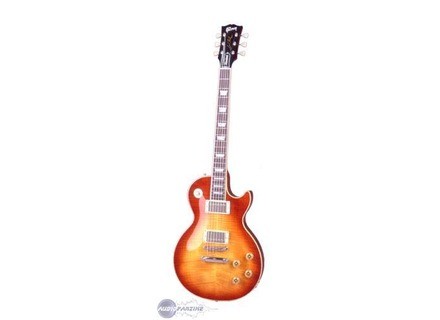 View other reviews for this product:
The Gibson Les Paul Standard is a standard Les Paul guitar for the most part. The Les Paul standard guitar was introduced in 1958. They came with the first PAF pickups and when people talk about the Gibson tone they are talking about these. They were only made for two years and less than 2000 were made. They stopped making these when they came out with the 61 Les Paul which became the SG. The current Les Paul standard was introduced in 2008 and it has many of the same features as the original. The main difference and problem with these guitars is that they are chambered for weight. This effects the tone and makes them kind of sound like hollow body guitars. They have the standard Les Paul setup with mahogany body with a maple top and a mahogany neck with a 22 fret rosewood fretboard. Two humbucking pickups with dual volume and tone controls with a 3 way toggle switch pickup selector. The up position on the switch selects the neck pickup. The middle position on the pickup selector selects both pickups. And the down position on the pickup selector selects the bridge pickup.

In modern terms the classic Les Paul design is not the most playable guitar out there. If you are use to Ibanez necks the Les Paul neck will be very big for you. Because of the set neck design there is a large neck tenon and joint. This can make the upper frets hard for some people to reach because the body essentially joins the neck at the 17th fret. After the 17th fret you are reaching around the body to get to the frets. The tuning stability is good because there is no tremolo. The tune-o-matic bridge can be uncomfortable for some people. It has sharp edges where the strings come in contact and these can get into your hand. Replacing these with roller bridges can make them more comfortable and decrease string breakages. When you change strings the bridge can come off because it is held on by string tension. If this happens make sure you put it on the right way because you can put it on backwards and your intonation will be horribly off. When this happens your guitar will sound in tune on the open strings but any chords you play will sound off.

A 58 Les Paul standard is the tone that everyone thinks about when they say Les Paul sound. The original Standards go for hundreds of thousands of dollars now. The Standard today may look the same but internally it is very different. With the chambered body the sound is quite different. A few years ago Gibson started chambering their guitars for weight. I think they were giving in to some people they should have. A real Gibson player knows the weight of the guitar is part of the tone. People who complain about weight are obviously not playing a Les Paul for the tone, they are probably playing it for the looks or because they want to say they play a Gibson. With the chambered bodies the Les Pauls get a thinner airy sound. It is not the thick sound you associate with a Gibson Les Paul.

There are a lot of things to like about the Les Paul. It is a Gibson Les Paul so it will hold its value well. It has the classic looks and feel of an old school Les Paul. Modern sensabilities have taken some of the tone from the Standard. People complaining that they were too heavy have the wrong mindset. Some things have to be sacrificed for tone. And with the new Standard Gibson sacrificed the wrong thing.
Did you find this review helpful?yesno
Cookies help us improve performance, enhance user experience and deliver our services. By using our services, you agree to our use of cookies. Find out more.