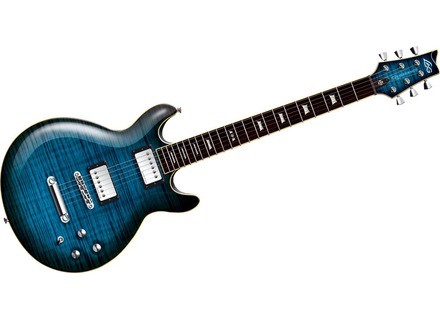 View other reviews for this product:
This guitar is French of course! Bédarieux plant (see Lag site for photos and everything).
Purple haze, 22 frets, 2 Seymour Duncan double. The pickups are hot but the directory stops at the boundaries of a very large distos, the grain is fairly well defined even with the base saturation. (Wish that it grows a little more than elsewhere, but a possible change of microphones can help to get the sound Hey ... we&#39;re not all like that?) Attention mics are excellent, it is that a critical objective in the grain in the absolute, the sounds come out smoothly is a treat in all styles. Versatility of this microphone helped by setting options galore! split pickups, adjustable for each volume, etc (the foot!) The handle is a marvel but the ebony fingerboard may surprise (sweet to die for) and it takes getting used to, but after a while you will find it very nice (it must do to bends as the key slides quite so big gain accuracy)
I put 9 because it is a dream guitar but there is a crazy dream called PRS (10)

For those who have not won the lottery follow me!
So yes the handle class too good, the binding nature (in fact we see just varnish the wood, not stained like the rest of the body) is a marvel! It makes you dizzy playing so much the quality of the wood suggests all its depth in the small band of traveling completely around the instrument.
ACCESS is sharp nickel chrome, however large mimine will get used to the cutaway treble a bit small for handing over to the vertical (must extend fingers a little but it&#39;s a detail, since this instrument deserves that it is done to him)
The guitar is made more for a game you can play standing up but sat down without any difficulty annoying. It has its weight but, seriously, who would complain (the plywood is lighter but hey it must not sound the same! No? Good short ...)
on the other hand you will not get your sound like that without giving you body and soul to the beautiful, and yes the settings are easy but a thousandth of a round knobs change the sound so again will have to use this wonderful addition to few hours to go around its capabilities!
I put 9 because perfection does not exist but that we do not laugh the more it is just too good too. It is a matter of taste I love this mixed form and SG PRS and you?
The head is one of the most beautiful I also like that of the dean hardtail (I&#39;m not a fan of ibanez stratos or with respect to the design of the head)

I play everything, I thought at first that by choosing a guitar is more 1000euros inévitablemnt had to be limited to one style music (for shred ibanez, fender to blues, to rock gibson) but it&#39;s bullshit must not listen to sellers or magazines or even some groups that lack of personality based on the legends of the guitar. It&#39;s a shame because I never see lag, for example when it is the best! I know the temptation is great to hold in his hands the guitar of Hendrix or Santana to slash this is the essence of our passion for the guitar, our desire to learn to play to sound like them but the sound is also in the fingers, in your head. Of course you can buy several guitars and a variety of approaches, but here I am speaking more to those who are reluctant to buy a guitar, snapping their economies once and for all, even if it is not the complete ruin as you will see later .
For now I have a transistor amp but I will soon opt for a lamp (or fender or peavey laney I know that Laney 15 watts for the home is well sounds good with it so ...)
This guitar has a very good sustain it vibrates in you and project the sound of happiness.
I put 8 because as I said before I wanted more sustain like Santana, but we approach it (p&#39;tete mics I&#39;ll see)

I went to her to form the overall beauty and I will keep everything else as it has everything. The woods are gorgeous, the sound is good in short, everything just everything.
downside: access to acute slowed slightly (very slightly) by the cutaway a little tight. No stomach cutting or rounded at the front right hand (pick hand) so the game sitting requires more delicate and requires finding proper playing position. (This part, however, the taming of the guitar and contributes to the charm of this one as everything else). I tried other stuff before and Vigier: industrial, parker: p44, brian moore, all very well but it&#39;s really the form that attracted me the most. Else take the time to try it disconnected when there is no one in the store (not too loud) to capture the subtlety of sound, its vibrations. Still it does not deliver you all its secrets in one session! Good luck.
In fact, I bought it in early April 2006 in Paris 9th 1590euros. It is rare to find in stores so go see everywhere Watch out for the price!
The value for money is one of the best so I trusted Lag is substantially the same quality as Professors at the violin and is more rare then you make envious!
PS: With this guitar you have to play with and take a minimum of 10/46 instead of elixir strings (Original mounted elsewhere) the ease of playing is much higher and last longer.
See the source
Did you find this review helpful?yesno
Cookies help us improve performance, enhance user experience and deliver our services. By using our services, you agree to our use of cookies. Find out more.