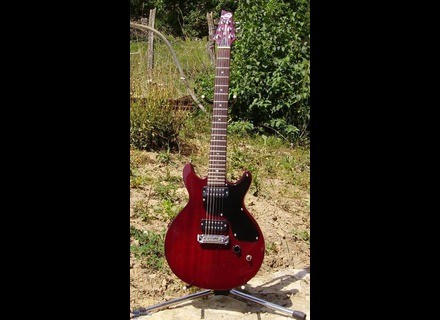 Roxanne STD-93, LP-Shaped Guitar from Lâg in the Roxanne series.

View other reviews for this product:
Basically, this guitar is a copy of Les Paul Junior Double Cutaway. It is red with a black plate, two double micro Di Marzio like the P 90. A three-position selector and one volume knob, no adjustment of Tone which is unfortunate. His body is mahogany, with a handle al of the same wood and a rosewood fingerboard seems he, with twenty two jumbo frets. Only the head shows the identity Lag. It is simple, but nice. It makes silent in France, Lag time did not dlocalis production. The violin is good, but the comfort of a lightweight ptit dsquilibre: the guitar takes a bit of the ct of the handle. It's a shame because the guitar is comfortable enough for the rest.

The neck is quite stiff, it's probably the weak point of this instrument. It is broad and not very comfortable, that's fine, but we have seen better. At the same time, as is destined to rock a guitar years 60-70, and the blues, we will not play with virtuoso fusion. For the rest with a single potentiomtre little chance of being wrong. Overall, the guitar is comfortable and pluttlgere. It allows for a Gibson's in the spirit without killing your back and wallet. Note that the bridge-tailpiece makes string changing a lot more pnible stopbar duo, tune-o-matic. We must constantly vrifier the rope remains in the slot, until it is tight

The sound is pretty close to that of an SG. The sustain is good, but not that of a Gibson LP. This gives clear sounds that would fit even to jazz (especially with two microphones in SERIES). Saturation or crunch has sounds good, friendly enough, but I find the lack of a micro punch hair, surout bridge pickup. Is it can be part of the age of the guitar which fifteen years. I use a Crate V1512 lamp, an old amp franais Garen, lamps also. With Tubescreamer is happiness.

I use it for a month. I dplore its lack of tonal and the SETTING THE dsquilibre when playing standing up, but I like the sound and Aesthetics. It is a simple guitar and strong: it plugs and plays, no adjustment endless. I use it in places I dare not go out o my Les Paul standard (like beef with musicians trs not careful). It provides good sound Gibson, a relatively low price (I pay 420 euros used). At this price, trs correct, if there had been a Gibson logo on it, c'tait double, gold, benefits are somewhat similar prs.
See the source
Did you find this review helpful?yesno
Cookies help us improve performance, enhance user experience and deliver our services. By using our services, you agree to our use of cookies. Find out more.