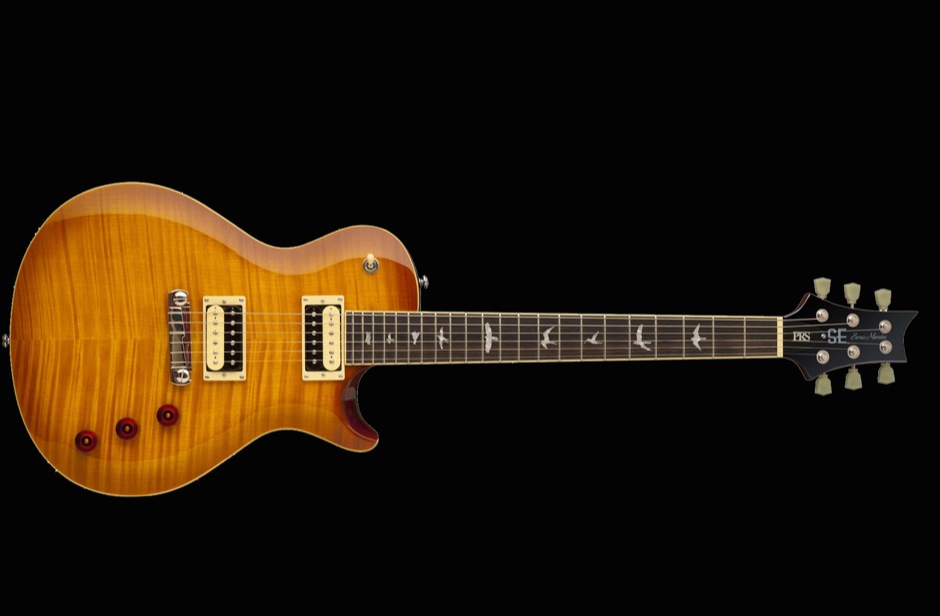 LP-Shaped Guitar from PRS belonging to the SE Signature series.

View other reviews for this product:
tjon901

« A nice SE singlecut that happens to be a signature »

Publié le 02/07/12 à 10:47
Bernie Marsden was one of the early guitar players in Whitesnake. He has been active again recently and now has a PRS signature mdoel. This is the PRS SE Bernie Marsden model. At first I didnt realize this was a signature guitar. It doesnt have any crazy markings on it I just thought they fixed the control layout on the normal PRS SE Singlecut. That being said there arent many differences between this model and the normal PRS SE Singlecut but all the changes make the guitar better in my opinion. The guitar has a mahogany body with a maple top. The top has a flamed maple veneer on it which is quite nice. The guitar has a set mahogany neck with a modified wide fat profile. It is a bit fatter and based on one of Bernies personal guitars. Up top on the headstock there are Kluson style tuners that are non locking but hold tuning well. The bridge is the PRS Wraparound style bridge that works fine. The pickups are normal PRS humbuckers in a Zebra pattern. The controls are in a more traditional layout. The pickup selector is on the upper bout and the controls consist of two volume knobs and a master tone.

These import PRS guitars have great features and feel for the price. This guitar has a more traditional feel than some of the other PRS Singlecuts. The neck is nice and chunky like an old Les Paul. The vintage style tuners are vintage style but hold tuning a lot better than real vintage pickups. The bridge is the wraparound PRS design but they have refined the bridge over the years and it works great. The intonation on the bridge is perfect with the guitar. The guitar has a 24.5 inch scale which gives you a more Gibson style feel as well. To add to the more traditional feel the guitar is full thickness like you would get on a real Les Paul.

The pickups in this guitar are nothing special but they get the job done. For their import models PRS uses some decent all around pickups. I dont know what specific model these pickups are but they have a very old school tone to them. They are medium output and have a good bite to them. The pickups clean up great and are very touch sensitive. They have great dynamics for no name pickups. The bridge pickup has a bit of bite to it. If you play with the volume knob you can get nice tones from dirty to clean. Playing in Whitesnake you know Bernie needs a good heavy sound. These can do a good classic rock tone but also have a good overall tone to them. The neck pickup has a nice PAF style bluesy tone to it. It works well with the bridge.

This is the good kind of signature guitar. Bernie actually plays these unlike a lot of PRS endorsers. A lot of them have PRS SE signature models but play the made in the USA model. Bernie says this guitar is absolutely fine and he gigs with it. It does not have any crazy markings on it that make it stand out either. Just the Bernie Marsden signature on the headstock. Les Pauls all have signatures on their headstock so a signature on the headstock is nothing to get mad about. These guitars are very well priced too at only about 600 dollars. These can compete very well with Standard Gibsons in fit and finish and playability.
00