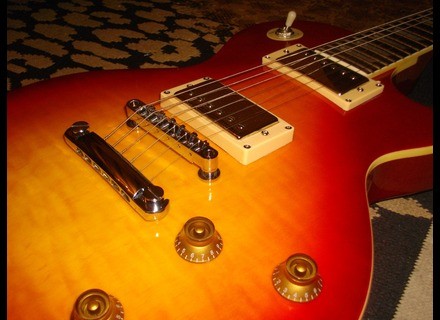 Value For Money : Excellent
View other reviews for this product:
French brand, but Asian manufacturing (obviously not Japanese), I do not know exactly the country of manufacture.

Easel type tune-o-matic tailpiece stop bar, but not exactly the same as my Gibson SG, it is nevertheless a very good job.

I do not know enough about all the profiles of innings, but roughly the same as on recent Gibson are not reissues. Advantage: the handle is asymmetric, this means that it is thinner towards the last freight, facilitating access to treble.

Humbuckers, according to the manufacturer, there are copies of PAF.

Mahogany body (one piece, not one floor like some Les Paul copies and original combined! See the pictures that I post)

I do not put 5 stars, because if you expect a perfect copy of a good old Gibson, one is disappointed, but for the price, I think one of the best copies we can find! It is not "cheap" at all, despite two or three details, but at this price, it easily passes them by!

Is my 8th guitar, and my 4th electric, and frankly, it kills!

The neck is superb, filled well by hand, the key is pleasant.

Ergonomics, well, what is a Les Paul! It is not for the ease of play is not a superstrate!
I summarize:
Access to acute really means, it is heavy (like real!), The micro switch may be activated unintentionally because of its position.

on the other hand, it is fairly well balanced when playing standing.

The sound? Superb! Really balanced. I enjoy playing Sweet Child O Mine, the Led Zep or the good old blues, taken without any head for settings. A serious mic, 1 mic acute, 1 volume and 1 tone for each microphone. What more?

Only small problem: the pickups are a little weaklings to my taste (at the same time, they're PAF ...), I would change perhaps, but not right now, waiting to see what really it has in the gut, das all conditions!

I play mostly blues, hard rock, and occasionally a bit of metal, just to have fun.

In the first two categories, it is really good, but once you looking for a large and well saturated, it no longer appropriate. At the same time, it was not designed for that!

Well, the humbucker, mahogany, it is not a well defined and well crystalline.
Instead, we are dealing with a Les Paul, a true! A fat, heavy, severe spitting it!
With its clean, it explodes into arpeggios, with full chords in solos.
We climb a little gain, and you type nervous easily in a blues or a good old rock type Rolling Stones.
Going back a little gain, and it gets off! Spend all the classics! Lynyrd Skynyrd, Guns, The Zep, ZZ Top, Pearl Jam ... Taking his foot squarely!

I play mostly on the treble pickups, volume and tone it up!
Simple trick to avoid: micro serious tone and zero ... there, it sucks, we do not get it, you no longer feel the attack ...

Another plus: if we lower the volume of a microphone to zero, the selector microphones can be used as ON / OFF button, handy when installing or we stop playing.

I did not last very long, and I took it especially for the concerts, in addition to my Gibson SG to change tunings, all that, or to have a its really hot, my SG is more aggressive. She looks great, a very pretty table, finishing more than correct, sound great.

I tried a bunch of models before I decide on that one, since the time I want a Les Paul! The Epiphone, the custom 77, Vintage, and Gibson, Japanese ...
For my budget (even less!) Is the one that pleased me the most!

As stated above, the finishes are top, sound too.
Level violin, she is really good too. The electronics are well built, although there was no case of Gibson or Japanese.

For the price, I do not think you can find a better Les Paul!
Above Epiphone, I'd say equivalent to a good custom 77, but cheaper, and better finished!

PS: I post pictures, but because the flash colors are really loud, do not rely on this