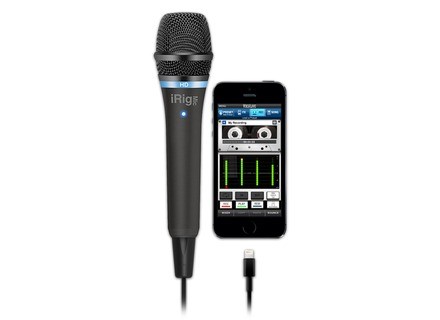 iRig Mic HD, Microphone for tablet/iDevice from IK Multimedia in the iRig series.

We announced it last night, IK Multimedia will launch the HD version of its iRig Mic microphone for iOS and Mac.

Despite its dynamic live look, the iRig Mic HD hosts an electret condenser capsule and a preamp for recording at home or on the go to your Mac, iPhone, iPod Touch and iPad. It ships with three detachable cables featuring Lighting, 30-pin and USB connectors.

The iRig Mic HD is also equipped with a 24-bit A/D converter and offers sample rates from 44.1 to 96kHz.

You’ll find on the metal body a multicolor LED for signal and level status as well as a gain control.

The iRig Mic HD ships with a bundle of free iOS apps, including VocaLive Free, iRig Recorder Free and AmpliTube Free, as well as the free version of AmpliTube for Mac OS X.