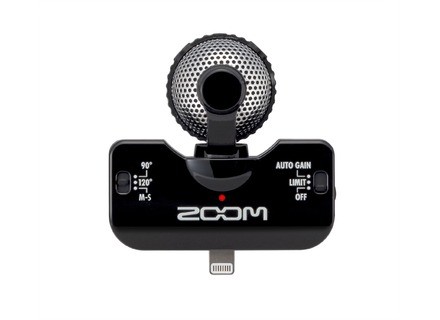 iQ5, Microphone for tablet/iDevice from Zoom in the iQ series.

Find it in the classifieds starting at $50 Avg used price: $58

In addition to its H1, H2, H4, and H6 recorders, Zoom has created a microphone compatible with Lightning-equipped iPhone, iPod Touch and iPad models.

The Indisputable leader in the market for pocket recorders for musicians with the celebrated H2, as well as the H1, H4n and H6 models, Zoom has only one competitor in the same range: Smartphones in general, and the iPhone, in particular. A telephone? Yes. But a telephone for which there exists a broad range of microphones by Tascam, Fostex, Blue, and Rode, to mention only a few. And a telephone that, even if inferior to the Zoom recorders in terms of autonomy and connections, is superior when it comes to other points, both in terms of functions and usability. While Zoom offers an offline recorder, Apple's iPhone is a multimedia pocket computer with network capabilities. Provided with a Full HD camera, the iPhone has features and apps that make all handheld recorders seem like they're from the Stone Age: Besides Wi-Fi, social-network management and cloud services, it is a much more powerful and effective platform than the H2n, and even the H6, when it comes to audio editing and processing options, and also to being incorporated in production workflows for certain activities (journalism, songwriting, etc.). Although Zoom has neither the aura nor the staggering means of Apple, it's certainly no less intelligent. Embracing the well-known saying, "if you can't beat them, join them," Zoom decided to offer the iQ5, a mic for latest generation iDevices. The idea is to be able to enjoy the technologies that make the H series so popular in your iPhone, iPod Touch or iPad. And it's even wiser of Zoom, since it has a good head start on its competitors by offering ─ as of the writing of this review ─ the only mic using the Lightning connector, even though the latter is present already in two generations. The iQ5 comes in plastic packaging without any case. It definitely has a family resemblance to the other recorders of the Japanese manufacturer and, especially, to the H1, whose spherical microphone comes quickly to mind. It can record in stereo, both in X/Y or M/S mode. The transducer has two different orientations to adapt itself both to the sound recording mode and the orientation of the iPhone. And that's a good thing because the portrait mode is best suited to record audio, while the landscape orientation will work better when using the video camera. And, in order for the user never to feel lost, Zoom marked the microphone very clearly to indicate the left, right and center pick-up zones.

The mic plugs into the small Lightning connector, which has the advantage of being non-directional. But it has the disadvantage of being more fragile when using accessories, since the connector is deeper and narrower than the old one (Zoom is certainly not to blame, but Apple is for not thinking about such details). Since it occupies the entire bottom edge of the iPhone, the iQ5 is unfortunately incompatible with many protective cases or shells. So, only a stripped iPhone accepts the accessory, which, as a consequence, blocks the headphone output. However, it's not that bad if you consider that the iQ5 features a built-in audio interface and, as such, provides a headphone output on the side. Next to it, a Micro-USB connector allows you to plug the iQ5 into any USB port, not with the idea of transferring data, but as an additional charging source, which you can connect to a dedicated power adapter, an external battery or a computer. A good idea to free yourself from the battery life problems of an iPhone, whose battery is used to feed the iQ5, which is something we will get back to later.

On the opposite side, a wheel allows you to adjust the microphone's gain, while on top there are two switches: One to select the recording mode (MS or XY with an angle of 90° or 120°) and another to enable the auto-gain or the limiter, or disable both. To finish up, there's a tiny red LED right at the center to indicate the power status of the iQ5 and only that: It is not an indicator whose intensity or color provides information about the signal picked up.

There's no question that the iQ5 is quite comprehensive for its size. Now let's see how it performs in use.

We had no issues connecting the iQ5 to the iPhone 5 that we used for the test, which recognized the Zoom device correctly. The first disappointment was the poor compatibility of the accessory with certain apps. While the device has no issues with many apps, it is limited by some others: With the very comprehensive FiRe 2 (which, after being bought by Rode was renamed Rode Rec), it was impossible to get a return over my headphones during recording, even if the mic worked perfectly, which can prove to be very annoying. Fortunately, I had no problems of the sort with MultiTrack DAW, Beatmaker or Loopy HD, to name just a few.

Besides, Zoom offers HandyRecorder, a dedicated free app for iQ5 owners. The software depicts in a photo-realistic fashion the design and usability of the recorders of the Zoom H series, which is a good thing for those familiar with them, who won't be disoriented. But on the downside, it is pretty unsophisticated in terms of features and usability: From the old-school navigation of menus and sub-menus to the impossibility of renaming files and the shortcomings in terms of available formats (WAV and AAC only) and sharing options (Soundcloud only, but no e-mail, Dropbox, Google Drive, or FTP). It would hardly be an exaggeration to say that Zoom is far from what an iPhone offers in terms of software. Even though you have an effects section that can always come in handy (EQ, Reverb and Mastering, which offers dynamics and spatialization effects), the basic editing functions, and the impossibility to switch to landscape view only make it annoying to use this app when there are so many other better ones around.

In terms of battery life, a small test confirms that the iQ5 + iPhone pair does pretty well, even if it's far from offering the autonomy of a battery recorder (especially since changing the batteries is much faster than recharging a device). With 5% of battery life, I was able to record nearly 15 minutes of audio in WAV format with the mics in the XY configuration (at 90°), and the preamp in auto-gain mode, while monitoring everything with my headphones. The result is even more respectable considering that I didn't intend to optimize the battery consumption of the device: The luminosity was set to normal (one third), and I had geolocation, Bluetooth, Wi-Fi, and the cellular network enabled. 15 minutes with 5%? This means five hours of battery life on average for the iPhone and iQ5 together. Even if its only a projection you should be wary since it is subject to different factors: The age of your battery (my iPhone is new), whether you move around or not and even the app used, which means this merely indicative data will be subject to very large variations. As soon as you switch to video mode, under the same conditions, you'll find that 1% battery life yields only a little more than a minute of video at 1080P and 24fps, which won't amaze anyone.

The iQ5 isn't as energy-consuming as you might think, but in a mobile context, and without a recharging possibility, it will certainly show its limits in terms of autonomy compared with pocket recorders and camcorders using exchangeable batteries. Unless, of course, you add to it USB batteries, which you can get for about $50, but whose bulk could prove inconvenient during a recording or a mobile shooting. The iQ5 holds all its promises when it comes to recording, given the significant leap in quality when passing from the iPhone's mic to the Zoom: Beyond the stereo possibility, the high mids are clearly less aggressive and the sound gains lots of details at the two ends of the frequency range. Nevertheless, the background noise, even though present (a stereo mic is not a shotgun mic, even in MS mode), compromises the intelligibility of the recording a lot less. In short, you go from the limited sound quality of the iPhone's built-in mic, to the sound of a field recorder like the Zoom H1 when using the iQ5. It's really like night and day in every situation: Be it to record guitar/vocals at home, record a loud concert in a venue (thanks to the internal limiter and the manual gain control), an interview, or even to hum a melody while on the subway.

Check out the comparison between the iPhone's mic and the iQ5 with the same source (the two iPhones being placed one on top of the other, so that the mics are as close as possible, and the iQ5 in XY configuration at 120° with auto-gain enabled).

Compared with an H4n from the same manufacturer, it's easy to notice a certain family resemblance, favoring the low end rather than the high end, contrary to what Olympus offers, for example. There are some differences at the spectral level, however, you must be careful to interpret them hastily. Once again, both devices were placed one on top of the other, so these slight position differences might account for such disparities.

It's worth saying that the quality gained in terms of audio recording will greatly benefit your videos whenever you shoot with your telephone. The possibility to orientate the capsule to adapt to portrait mode takes on its full meaning. If only you had an optical complement, like the Olloclip, for example, you'd have a solution here that, even if it can't put dedicated camcorders to shame (especially considering that the latter feature optical stabilizers), would surpass more than one PocketCam, both in terms of quality and functions. The only drawback is the battery life, as we mentioned above, and the limits that the different accessories might pose in terms of compatibility with protective cases.

But, once again, the real advantage of the iPhone + iQ5 combination lies in the wealth of the iOS ecosystem and the features available on Apple smartphones: With some good apps, you can easily undertake any editing, processing, conversion, or transfer tasks. And it's nice not to have to carry a laptop with you to be able to clean up and edit a recording and then upload it to an FTP or to Dropbox.

There's not much negative to say about the Zoom iQ5, which keeps all its promises ─ besides being the only mic available in Lightning format, for the time being. Some will surely prefer to use a good old H2 or H4 instead, for battery life reasons alone, but we must admit that the small Zoom accessory is an ideal complement to the iPhone and it will make more than one user very happy, whether it's a mobile musician, a journalist or a blogger. It's on the software side where there is more to regret, since Zoom really went for the minimum when it would've been easier and more productive to engage the services of dedicated iOS developers. But that can be easily compensated with a couple of dollars. As for the rest, it's all good.