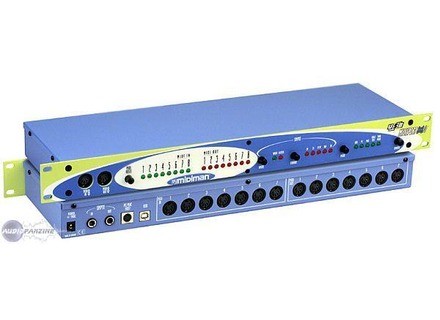 Midisport 8x8s, MIDI Interface from M-Audio in the Midisport series.

View other reviews for this product:
4 synths + 2 multi-effects (BOSS SX 700 and TC M300) + 1 guitar pedal (Tonelab SE)
It was therefore at least 7 MIDI I / O ....
Under USB, why not ...
With ca not always need to change wiring.
Motherboard and Intel CPU (P4, 3GHz)
Choice motivated in part by the reputation (it has a long history)

While stable, but the XP install should go on the net because it is a bit unusual (in fact during the install it to repeat the same manipulations Faur several times).
And no driver update on the net to make up for this feature.
For AC: -2 to score.
Otherwise, an Installed ca rolls smoothly.
No saturation, used with Cubase nothing special to say.

Used for 6 months.
Chosen for the reputation and price (it was in promotion).
Much cheaper than the equivalent of Steinberg .....
I already had the M-Audio hardware, and their hot-line is effective (that too is important!)
I would have preferred all the I / O on the back instead of having one at the front but ... -1 Still to score.
See the source
Did you find this review helpful?yesno
Cookies help us improve performance, enhance user experience and deliver our services. By using our services, you agree to our use of cookies. Find out more.