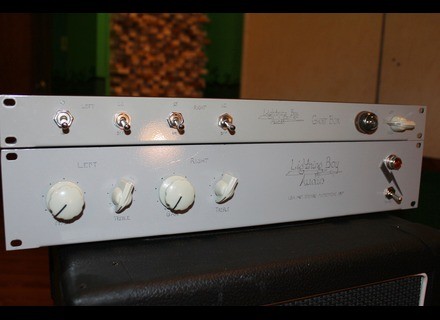 Ghost Box, Other Accessory For Microphone from Lightning Boy Audio.

The LBA 1401 and Ghost Box are available

After a few adjustments, Lightning Boy Audio finally debuts his 1401 Mic Preamp on which we had been working for quite some time now (see this news). The 1401 is a two-channel rackable tube mic preamp, each channel featuring independent gain and passive treble controls. You get +40dB of gain on each channel but you can link them and get +80dB of mono gain. While we are dealing with numbers, let’s say that the frequency response ranges from 10Hz to 40khz and the noise level is -80dB.

LBA used Carnhill transformers on both the input and output, two NOS 12AT7 twin triodes and one NOS 6X4WA rectifier tubes, as well as paper in oil capacitors.

You can combine the 1401 with the Ghost Power, a two-channel +48V phantom power in a 19” 1U rack format. Along with the phantom power, LBA included phase reverse and passive low-cut filter switches. You’ll also find in the box 6X4WA and NE-16 tubes as well as paper in oil capacitors in the low-cut circuit. All is hand-wired too.

Lightning Boy Audio also offers a bundle with the two processors for $2200.