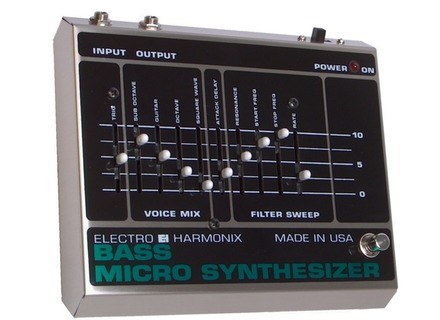 Buy this productView price information >
View other reviews for this product:
It's an analog filter with an input and an output line is the audio, no midi.
TRIG paramettre the first is the sensitivity of the effect

Then the following four parameters are the part VOICE MIX, four tracks stop adjustable by individual volume.
The first "sub octave" is an octave, one octave below the source, the second is called "guitar", that his presence be the original source, but slightly less qq sets, I think- it, then the parameter "octave" is a sound that is supposed to be a octave above the source, which is not necessarily clear with a low, but more with a keyboard, for example, pui "square wave "is the filter of the most interresting boiboite is a kind of distortion that produces the filtered synthetic sound.

The following parameters ATTACK DELAY, defines the sound attack, its direct or delayed.

Then the four remaining parameters are the part FILTER SWEEP, a dynamic filter (see Q tron) fully paramétrable.D First we have the "resonance" or, shall I say, aggression frequencies of sound, then two parameter "start FEQ" and "stop freq", which respectively define the frequency of the beginning and the end of the frequency of sound, pui "rate" means the speed of action of the filter.

We regret still scrubbing the home ELECTROHARMONIX, after a while
the on / off button that has loose connections, and gives a dream machine that will turn off anytime ... just RHAAAAAAAAAAAAAAAAAAAA !!!!!!!![ b]

This is the only downside to this wonder, this box is a true picture settings you have under the pied.Il takes a little time to use to understand how to use all these parameters, but that is not the problem. The catch is that you need to do all the settings by hand, know them all by heart (some sounds varrient a lot to near millimeter depending on the position of the button, for example, "rate" of FILTER SWEEP). Imagine you have to change between two pieces of her on stage, fell on to reach the cross-over at full speed, trying to get it right ... In my case, I never managed to find a desired sound live, prey stage in haste because of its nuances really are large and take a millimeter.
In addition, there is no way to save the settings .. HA, the charm of analog! We will therefore use the good old chips that will make marks on the box.
We also regret, or rather, it would be a machine you really titan if there avai access to an expression pedal, which is not the cas.Personnellement I ask up to hand to touch up her live as best they can ... but ... What sounds!!

Well done for her, really, because it is a synth sound that comes out of your bass, certainly, but not only, it is really sensitive, it is not froid.C is more an effect this machine is an extension of the instrument, and there's this incredible grain ... sounds at once derived from Star Trek, the vintage plastic, while having a real expression.PHOUUUUUUU

I still said that while quality sound suitable for a low, with separate notes, and its instrumental function of low boil down to two or three categories of sounds, which are assimilated many nuances.

You can also go through a keyboard, although concéquences long term are unknown, and rendering is also very good.

One more thing, for already in ELECTROHARMONIX, the slight overall loss of scale sonore.On then push the amp.

Madmen of "electro vintage" jubileront.Les Kraftwerk fans fall by followers of Father terre.Les Funkseront transportés.Les blocked from Star Wars, Forbidden Planet, 2OO1 the Space Odyssey will not believe see when their ears !!!!! Even the slight ergonomic and strength of solder rather regrettable (a look "clumsy" which is a look). A fine imitation of vintage, one would really believes, and it is expressive.
Do not eat.
See the source
Did you find this review helpful?yesno
Cookies help us improve performance, enhance user experience and deliver our services. By using our services, you agree to our use of cookies. Find out more.