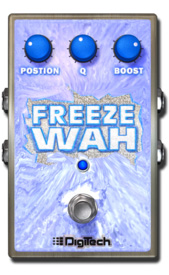 Other Effect Plug-in from DigiTech belonging to the iStomp series.

DigiTech introduces its DigiTech Freeze Wah, an e-pedal that gives guitarists the tone of a wah wah pedal kept in a fixed position.

The Freeze Wah re-creates this effect without having to keep the pedal of a standard wah wah pedal in one place.

The DigiTech Freeze Wah features knobs for Position, which sets the sweet spot “pedal position” of the wah, Q, which controls the frequency bandwidth of the effect, and Boost, which adjusts the boost level of the effect. By manipulating these three knobs, a variety of fixed-wah effects can be obtained

The DigiTech iStomp is currently available at $229.95 MSRP.