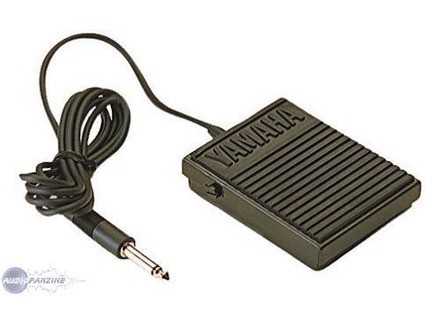 FC5, Other Accessory for Keyboard from Yamaha.

View other reviews for this product:
The Yamaha FC-5 is a simple sustain pedal for use with any sort of keyboard or MIDI controller.  I've used the FC-5 with a few different keyboards out there, as it will work with any keyboard that has a 1/4 inch output for sustain (which includes just about every keyboard ever made).  I've used the sustain pedal with the M-Audio 49e Keystation MIDI controller as well as with a the smaller M-Audio Oxygen 8.  Let me start by saying that this isn't the ideal sustain pedal in terms of its size, as I would always rather have a full pedal.  However, when I'm using a smaller MIDI controller it is easy to bring this sustain pedal along since it is a lot smaller.  It is also much cheaper than a traditional sustain pedal.  Beyond its small size, I've found the FC-5 to be a perfectly good sustain pedal.  It gets the job done when I want to use it, and in the five or six years that I have had it, I've never had anything break or anything like that.  The cable is long enough to reach wherever I need it to, but isn't too long where it takes up a lot of space.  Really, my only complaint about the Yamaha FC-5 is how small it is and that sometimes while I'm playing if I don't have it right near my feet, it can be a bit hard to locate.  However, since I know this I will generally keep it right under my foot to keep it in place.  If you're playing keyboards a lot and use sustain a lot, I'd probably recommend just spending a few extra bucks to get a full size one, but if you need something a bit more portable and cheaper, the Yamaha FC-5 is a pretty good choice for a sustain pedal of this size.