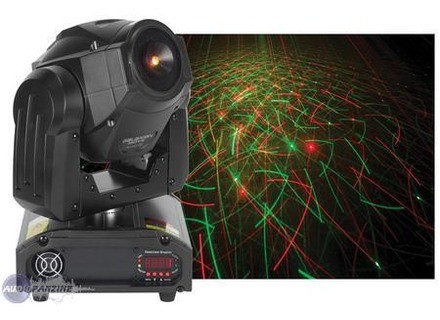 American DJ has introduced the Galaxian Move, a moving head version of its Galaxian red and green laser beam effect.

Designed for small clubs, bands and mobile entertainers, the Galaxian Move has a 540° pan and 270° tilt movement.

Like the original Galaxian, the Galaxian Move features both a 30mW green laser and an 80mW red laser to create a shower of 500 little colored pin dots of light. With the sweep of its moving head and upright 90° beam angle, the Galaxian Move is designed to cover the ceiling and walls of a venue to create a "Milky Way" scene. The stars "dance" together and can either be programmed in by the user or recalled from a bank of factory presets, with or without the use of fog.

The Galaxian Move features 3 operating modes: DMX, Sound Active and Master-Slave. In DMX mode, the Galaxian Move offers 6-channel operation (pan, tilt, red laser, green laser, rotation, macro). DJs who don't want to use DMX can set the Galaxian Move to Sound Active mode and let it follow the beat of the music according to its own internal programs. Four different show modes are available for the factory presets.

In Master-Slave mode, multiple units can be synched up using standard 3-pin XLR connectors. One special feature of the Galaxian Move is its Pan/Tilt Inversion Mode, which kicks in when four units are running together Master-Slave. Instead of all four scanners moving in sync, as is typically the case with Master-Slave operation, units 1 and 3 will sync together, while units 2 and 4 move in the opposite direction, in the mirror image of the other two.

The effect has a power consumption of 5 watts, allowing users to connect more units on a single electric circuit and saving on energy costs. Other features include random strobe from slow to fast, stepper motors with micro stepping for smooth movements, and switchable voltage (5V or 30V) located on the rear panel. The unit comes with a 1/4" input for remote operation using the optional UC3 universal controller from American DJ (sold separately).

For more information, visit their web site at www.americandj.com.