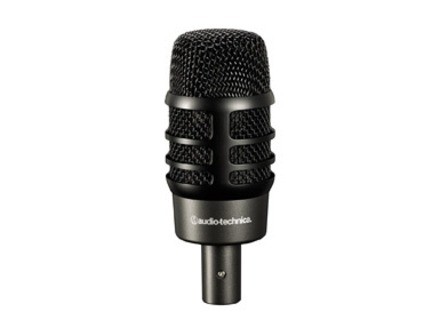 ATM250DE, Other Microphone from Audio-Technica.

View other reviews for this product:
The Audio-Technica ATM250DE is a solid kick drum microphone with a high price tag. I have used other microphones that are half of what the ATM250DE cost that sound pretty similar too it. The Shure SM67 or maybe even the D112 are the microphones that I would say the are closest in quality to the ATM250DE but they cost less than it does. The ATM250DE is a cardioid condenser microphone with hypercardioid pickup patterns. It is a solid microphone to use for your kick drum and guitar amps. One thing I can say about this microphone is that it will give you a really big sound! The old fashion way to get those really big sounding kicks or guitars is to point multiple microphones that the instrument and then bring it all together in the mix. But with the ATM250DE it will basically do that for you without causing any problems between dynamic or condenser frequencies and elements. I have been using this microphone since 2009 and stopped using it in 2011 due to some issues I was having with the cord ( think there was a short). I ended up selling the microphone for almost what its worth brand new to a local band member.

Overall, the ATM250DE has a dynamic microphone capsule as well as a condenser capsule, that is why the price is so high. If you are willing to make the investment to purchase the Audio-Technica ATM250DE you will love how good it sounds, it will really bring your kick drum or guitar sound to life with no effort or EQ’ing involved. This Dual Element microphone is well worth the money spent, it is very rugged and it will last you a long time. It comes with a clamp for mounting and a cord (which was defective in my case) but I could have just had a bad one out of the bunch. I have never heard of anyone else having the issue that I was having. This microphone is outstanding and it is top notch. You will get a professional sound with no effort.