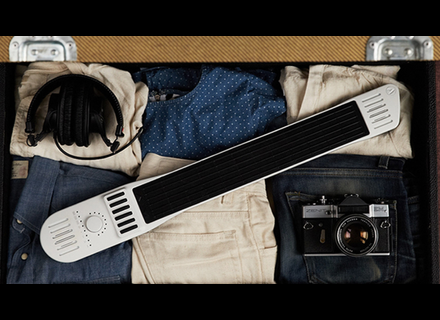 Instrument 1, Other MIDI Controller from Artiphon.

Artiphon has been teasing details of its first instrument, Instrument 1.

Instrument 1 is a form of controller to be used in conjunction with an iOS device, inspired by traditional stringed instruments and featuring a 'force-sensitive virtual string interface', as well as some form of multitrack recording capability and audio and MIDI outs.

According to the Artiphon official site: "We are extending the musical possibilities of iOS devices into dramatically new territory. With an ergonomic body crafted from heirloom-quality hardwoods, this hybrid species of instrument offers musicians a force-sensitive interface, robust connectivity, and exceptional sound quality. Whether playing at home, in the studio, on the road, or on stage, Artiphon presents a dynamically new way to touch sound."

The following features have been announced: