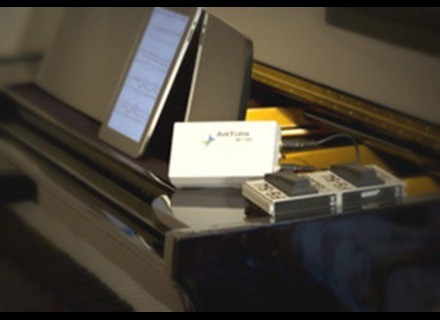 View other reviews for this product:
The AirTurn BT-105 will allow you to take control over your tablet wirelessly and you can use it with Mac or PC style tablets running Android or iOS operating systems. You can use it to turn the page on what you are reading on your iPad, it comes in handy for sheet music that is digital because you will no longer have to flip pages or even touch your iPad to get to the next page or score. There is a huge list of apps that are compatible with the BT-105. iRealB, iGigBook, Avid Scorch, DeepDish GigBook, forScore, MuseScore Sheet Music Viewer, Musicnotes Sheet Music Viewer for iPad are some of the apps that are compatible but there are a lot more other than the ones that I have listed. These are just the ones that I use the most.

The BT-105 is pretty portable and weighs less than a pound. It is only 4 by 7 inches wide and 7/8 of an inch thick. The manual that comes with the BT-105 is easy to comprehend and understand. It is basically just explaining how to get it to work with your system or apps that you choose to use with it. All of the functions of the BT-105 are easy to use and set up.

The BT-105 works great with both Mac and PC computers as well as tablets. I have used it on two different tablets and seen it used on just about any popular tablet that is out and it has never had any issues or stopped working so far. I have not been using the BT-105 for that long but in the time that I have spent with it I have not noticed any issues.
Overall, I think this is a great addition to anyways home. Not just if you are a musician but if you would like to have a device that can take control over your tablet or computer wirelessly. It was a great invention and I have heard they are going to release a newer version of it soon with some more features so be on the look out.