What’s the mood of your songs? 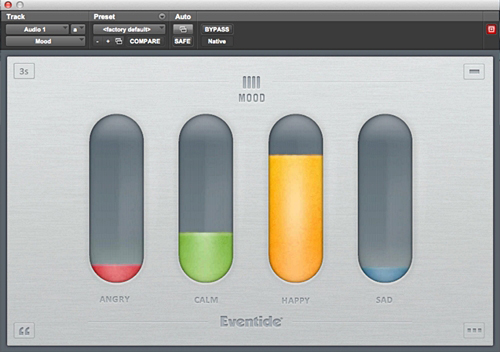 Other Music Software from Eventide .

This is the question Eventide is trying to answer with Mood, a new plug-in designed for analyzing the emotional part of music.

Mood analyzes the tone, spectral content, tempo and dynamics, among others, of songs in order to create “descriptors” that will be compared within a database. This database is currently filled by the Eventide team based on pop songs but with the free 90 day trial version that the brand released today, you are also invited to complete the work that has already been done in order to offer a fully operational final version in a few months.

The plug-in displays the emotional state of the songs via four emotion meters: angry, calm, happy and sad. The intensity of these emotions is rendered in MIDI or OSC values, which can be used to control, for example, lightning on stage.

A link is available in the plug-in so that you can send you comments and report when emotions shown do no suit the songs you are listening.

To download the Mood trial version, you need an iLok account (but not necessarily an iLok dongle, thanks to the new Pace Eden system you can now active licences directly on your computer).

Eventide will also reward 10 “testers” with a full licence of Mood when the plug-in is release, which is expected in March 2014.