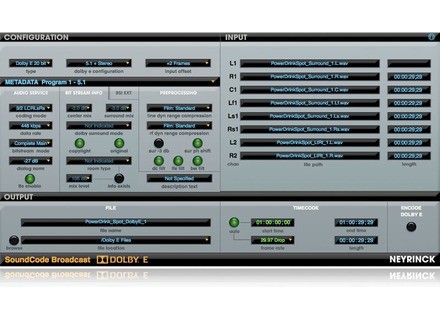 SoundCode For Dolby E, Other Music Software from Neyrinck.

Version 2.0 is an update to the Dolby E software tools, designed to make it easier and faster to work with Dolby E.

SoundCode For Dolby E's decoding has also been extended in version 2.0. VST and Audio Unit plug-ins have been added to allow realtime Dolby E monitoring in workstations such as Nuendo, Pyramix, and Soundtrack Pro. Dolby E monitoring has been extended to output all eight channels simultaneous. A hot folder decode feature has been added to the standalone app for ingest workflows. And on the Mac, Neyrinck has created a utility called N-Mon that uses the Audio Unit plug-in as a realtime Dolby E monitor for Quicktime Player, Final Cut, or external video tape deck. N-Mon accomplishes application monitoring by providing a core audio input device that any core audio application can connect to. N-Mon uses the Audio Unit decoder plug-in to decode and play the audio out to any core audio device. And N-Mon provides the option to monitor from any core audio input so a Mac can operate as a standalone Dolby E monitor for testing video tape laybacks.