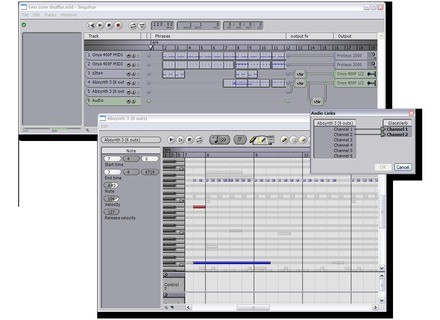 For installation, the executable is just starting, and the installation is at the same time, and note for this version, 1.1, Pipelines Limited Uninstallation a file in the r directory of the executable.
Realfuitar with, for example, you can not see the pattern.
actually, good configuration, as very intuitive, we're going straight to the point, not to seek beasoin 2:00 p.m. come twelve o'clock some behemoths like cubase
The manual is on the site, but I have not used since the easy handling.

I push its limits, with a fairly complex project, approximately 15 tracks;
QY100 it, the more my synht (the tyros), plus RealGuitar, FM7, it holds water, but bug by now, it notes that persist on some tracks.
But aside from some bugs without too much climbing it holds the road well.

It's been about a month (but not affiliated), I use it.
After trying many, I can say I am very happy for a beta version, has promised, has made me think a little in his Ableton Live and Cakewalk beginners.
In addition to its simplicity it is intuitive and it's bonus features with caches.
But c is true, it lacks some basic features worthy of a squenceur, but remember that this is a beta version, but not if this beta in the spirit of the bte
So "try" and especially "keep below the elbow, you never know, sometimes that has become a bomb ...
I would do the selection of this will be possible.
See the source
Did you find this review helpful?yesno
Cookies help us improve performance, enhance user experience and deliver our services. By using our services, you agree to our use of cookies. Find out more.