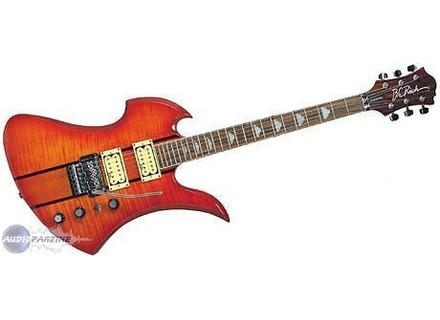 View other reviews for this product:
This is the BC Rich Mockingbird Neck-Thru 2003 made in Korea. CHARACTERISTICS The most attractive of this guitar is its neck-24-3-roomed huts saddle that provides unparalleled stability and sustain to guitars that have them. The head is classically styled with mcaniques arranged in 3x3. For the remaining CHARACTERISTICS, Submitted by the manufacturer they seem fake (?)! APRs have brought the guitar to Patrice Blanc (http://www.patrice-blanc.com/) to ask a "battery cover" for the battery that will power the EMG I mont d s taking possession of the guitar, it told me that the wings n&#39;taient not stocky, as announced but silent mahogany. This is not a loss at all, far from l. Similarly the key is rosewood but bne. L too, one loses nothing by the change. The key again is diamonds and there is no binding around the handle. It should also prciser the guitar has a table that adds Saddle look especially because the table itself is trs fine and must have little influence on the sound. the guitar is a transparent red, trs dark and got better. The head is attached to the body as a red leaf on it Saddle. The guitar is equipped with a licensed Floyd Rose vibrato that seems correct. Like most of Mockingbird, two humbucker pickups, two volumes, one tone and one slecteur three positions. For points ngatifs must speak of the finish that could be more caring for a guitar that prtend this "luxury", even if the default events are especially cosmtiques and do not affect the jouabilit of the instrument. However, note the default pnalise (sometimes rude!) Finish.

When you take the guitar, it is immediately shocked by the weight of the BTE. It is at least as heavy as a Les Paul! So frles shoulders, go your way. It must be tough to keep the vehicle on the shoulder for a long time! Fortunately for the rest the guitar appears trs comfortable. Despite the form of particulire Mockingbird, sitting does not gnre particulire ESG. And the sleeve? It is a rgal! The key is plutt wide and thin enough profile. The game lead or agreement is ais. We make a kind of round that could be described as "modern". CHAC is fantastic to acute (neck-forces!). We can go the bender 24me box if you want! To speak of the frets can be said to be typical of BC Rich: These are jumbo frets, but not as large as those that can be found on Jackson, for example (Ah, the sleeves Jackson! .. .). That said, they are well finished and have done everything enjoyable. And sound then? Let&#39;s see below.

I like to play guitar electric acoustic stringed instruments to test them. On this bluff littralement Mockingbird I t! Obviously there is a standard sustain, but also the sound that it is hyper DGIG enjoyable. standards are low! There is little doubt that we will have to do with a guitar sound for the size consistent. Well, trs honntement, I have not really tried the microphones of origin. The little I have with silent jou To verify that the electronic working well. They seemed to be the style BC Rich is saying with a standard output level and plutt aggressive, even if the neck pickup seemed to be more versatile, including having a good made with sounds clear. For my part, I quickly mount of EMG, a bridge and 81 in 60 in a sleeve, and adpote! I plugged everything in my Rocktron Voodu valve amplifier with a Mesa Boogie 50/50 and c&#39;tait the fire of hell with its huge! With EMG 60 clean sounds have the extraordinary low and natural harmonics are endless. With the 81&#39;s the butcher gnrale! Yet the sound is an exemplary DEFINITIONS distortion harmonic (who had believed?). Lead in the notes on the contrary a lgre imprcision making them "singing" with a good dynamic. It is all same thundering! It seems to me that the guitar has a sound spectrum in naturally hollowed trs frquences mdiums. We must therefore review its SETTING THE amp if you dig a lot adj&#39;s and if one does not want to mix the trap for a lack of prsence. The overflow of low frequencies can sometimes be difficult gnrer grate and a lack of precision in the sound that we are not always right apprcier (hack deadly atmosphere its pramp to compensate!), and the weight of the guitar comes in the end by s&#39;avrer Gnant during "rpt" marathons "(and an arm tourniquet p&#39;tit Left !...). In the end, I love it when even the sound of this guitar, you just take the time to matriser.

This guitar is one of the best I&#39;ve ever tried. It comes from the United States because it is not distributed in France. I bought it new for $ really low, it&#39;s a real bargain. The default key of the guitar is its relative lev but especially finish trend "over the hard." But as I prcis above, none of these hinder the default jouabilit. And then there&#39;s the sound! has come! Then the rest, for the price, it does not matter. Finally, last dtail must prvoir a tui bird to transport because none came with and none is sold in France. You have to go see the ct of States to find one. Moreover, a prvoyez MODEL bass because the guitar is made for the tuning fork "type Gibson" (short) while the Mockingbird Neck-Thru has a tuning fork "type Fender" (long). In conclusion, a great guitar and I do it again this choice without hsiter!
See the source
Did you find this review helpful?yesno
Cookies help us improve performance, enhance user experience and deliver our services. By using our services, you agree to our use of cookies. Find out more.