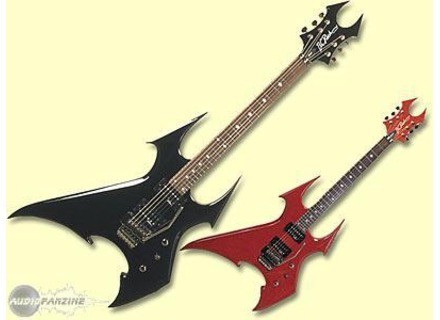 Platinum Pro Beast, Other Shape Guitar from B.C. Rich in the Beast series.

View other reviews for this product:
-The BC Rich Beast Platinum Pro is a guitar manufacturing Coren, it has 24 frets and two BC Rich humbuckers.
-The chavalet is licensed Floyd 2nd gnration
This guitar-a possde SETTING THE SETTING THE Tone a volume knob and a 3 mic positions.
I think the body is alder and the neck in Rabl (I saw some guys also say that the body silent in Agathis and rosewood handle .... but hey I&#39;m not bcherons and Wood is not my thing: D ...)
-Then I want to emphasize the beautiful shape of this bte, when the two lots to play three pieces, everyone looks at you with eyes phew! Basically it is a guitar that class! (Like me lol)
And finally, I the shape of the guitar is very practical, if someone shit on the bus, you can get out the guitar and plug it with: D)

-The handle is agraeble to play (not a fender either), it is flat and possde good form for fast solos, and the sherd .... heavy riffs nag!
-The ACCS is acute in very easy thanks to the particular cut of the scraper.
Question-weight, it can be found a bit heavy when playing standing onn, but it&#39;s not a gibson not in any way you get used to
-Qand you play sitting down, the spikes of skyscrapers fcheuse have a tendency to get into the sternum (lol), but anyway it&#39;s a guitar BDSM, then it will not pleindre (loool! !), not sincrement, we adopt a sitting postion diffrent compared to other guitars, you stand straighter and less sag on the instrument, what class!
Ultimately, it plutt a guitar to play standing, then who cares! (That would sincerely pity to see a guy play with this skyscraper sitting on his amp during a concert!)

&#39;Then I play symphonic metal, heavy metal etc. .... but also the blues sometimes and I find the sound of the guitar lends itself very well!
Indeed, when we see the shape of the guitar, we say that the sound saturates quickly even in super clear ... Well no! I get to have a pretty hot, super fat, very low round full-not bad for a good blues! (Attention is not the sound of a vintage Les Paul either!)
The sound is modern and very oriented plutt towards the low round for the microphones to the microphone of the bridge, there is more treble but the bass are still very present.
In general, the microphones in a hollow possdent mdiums, boosted the bass and treble "normal"
It is regrettable BC Rich pickups on the difficulty we produce harmonics (artificial), but with practice, you get there ... (A little difficult you must admit ...)
As against the point where the guitar excels is the Palm-Mute, super deep with lots of return, the thing that gets you out the guts especially when you have the sound that goes with it!
It may be noted that the knob tonalite is not super high (but hey, it&#39;s a guitar with humbucker nag!), I often play solo with a tonalite melts and the microphones acute, sometimes it m &#39;sometimes use the microphone for some of the handle Shred, because the neck pickup is less than prcis acute and notes that the transition is more naturally.

Nanmoins can blame him a certain lack of versatility, although the clean sound does not saturate ..

A yeah, microphones tend to blow a lot of distortion (but like with all the microphones), but the wind is not too annoying, especially when played with a pedalboard who owns a noise reductor . (Edit: I think the noise is the cre of my distortion pedals).

In fact it is like most guitars, to enjoy it, you must have a good amp that goes with ...

I have this guitar since ending for a year, I tried an Ibanez guitar and others whose names do not reviend me, and I&#39;m thrilled!
What I like:
-Shape! What class! : P
The bass sound, and good fats in distortion and the blues
The stick-fast 24-fret
It makes game
It stands alone! lol it&#39;s convenient, there is no need to buy based guitar! (Stingy smart: D!)
-How easy it is to skewer someone, it must be said that the form lends itself perfectly! mdr)

What I like least:
-Mics are struggling to harmonics (it may also be a problem on my guitar strings, I would have to change ... And I suggest you try one to see ...)
Tonalite-scratching is the major guides (ca does not bother me, but you lose flexibility!)

-At first, this give you scratching holes in the thigh if you have the misfortune to play standing (but with time you get used to and it does worse
The guitar-possde a picnic when you play that supports sitting on your chest, it hurts to beginners, but it allows for a more upright position (in any case, the scraper is made to play up )
-Because of the problem above, if you ptez, friends tend to treat you Sado-Maso
-The guitar is quite heavy even when a whole. (But balanced)
-Some people criticize his lack of versatility (for my part I find it fits my style well).

The quality-price ratio is pretty good, even if the warlock platinum pro has the same features and is less expensive, form somewhat increased the price of the BTE, but I is not had this problem, we has made me 650 euros lol! 100 euros or less: p! niarkkk!
If I repeat this purchase, I think I would do it again!
See the source
Did you find this review helpful?yesno
Cookies help us improve performance, enhance user experience and deliver our services. By using our services, you agree to our use of cookies. Find out more.