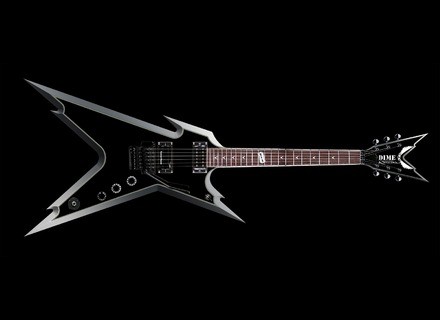 View other reviews for this product:
Short story: "Dimebag" Darrell Abbott was a ds its beginners Fidler follower of the Dean ML (despite infidlit between 1996 and 2004 at Washburn). In 2004, he returned to Dean with the proposed ML Submitted a redesigned by him: the Razorback, a more aggressive ML with inlay "razor blade" (pendant that was Dimebag). Dean Zelinsky accepted the sketch and the guitar was waiting for his official prsentation. Unfortunately Dimebag was murdered before the camera power on 8 December 2004, accusing it of a fan of Pantera sparation.

Channel shredder, fast, comfortable, excellent Access in treble.
Guitar (very) large but not too heavy (compared with a Gibson LP).
Good balance despite the inquitante form.
Only trouble: trs bulky (more than a ML or a flying V!) So the horns (and head) tend banging around!

Size for the mtal heavy? Ben ... not completely.
The Dimebucker (SH-13, signed with Seymour Duncan Dimebag) is scary! It sounds heavy and aggressive, artificial harmonics fuse: Dimebag lives in bte. The Dimebucker is inspired by the terrible Bill Lawrence XL500 (not easy to tame a monster).
And then selects the Dean ct round. And ... it is round, plutt soft, flexible but not at all consistent with the plumage. It can attack a few gentle rhythm blues, quiet. Dception.
The two pickups together, the Dean is furious soften the SH-13 and provides serious welcome.
I must say that I possde also a Dean Dime from Hell (Bill Lawrence and Dean XL5OO Zebra) and a Washburn Dime 333 (SH-13 team in and SH-6). The diffrence is so obvious and least aggressive of the three is then the Razorback, which is the most impressive yet.

DCID So I changed the pickups for a pair of DiMarzio Distortion X2N/Super. The Razorback is transfigured and takes the head of the trio.

Résumé to: plumage yes, the song no.
- In: The unique look. It could not be aggressive, but may be a Beast BCRich less smooth (and comfortable) all of the same. Also remember that the MODEL was designed by Dimebag itself, the demand for Dean Zelinski, as the ide to revisit and update the ML (mtal heavy sauce).
- Con: Dean ct round not agree with the radical MODEL. Now if you want some versatility ... but this is not quite MODEL cohrent and pluttdcevant.
See the source
Did you find this review helpful?yesno
Cookies help us improve performance, enhance user experience and deliver our services. By using our services, you agree to our use of cookies. Find out more.