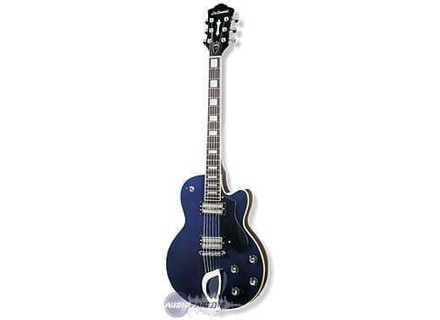 M75, Other Shape Guitar from DeArmond.

View other reviews for this product:
Acquired from Charlies Music, Hyannis Mass for about $500 with hard shell case. I was in there looking at Epiphone Les Paul Standards (because I couldn't afford a Gibson) when the guy hands me this thing. This is my first electric guitar and the first time I walked out of a music store with a new instrument the same day I saw it.

Whoa baby. It's been a year now, and there isn't anything DON'T like about it. Sonically, the Gold Tone humbucking pickups and tone pots are both widely versatile, and it's got sustain forever, even unplugged. A solid agathis body probably helps that happen. As I try it out on different amps - and especially when I play it side-by-side with other guitars, I continue to be impressed by the sounds it can produce. Big fatty frets make chording and soloing easy.

In the looks department, DeArmond calls the finish on this one Moon Blue and it's is a pretty apt name for something that is mysterious and beautiful - Almost black in the shadows and the richest kind of Royal, almost Violet color in the light. Practically irridescent, but in a very tasteful way. Cream binding on the body and neck and block pear inlays in the neck are also nice appointments. I wasn't sure about the 'harp' tailpiece on this at first...overkill? Just a tad ostentatious - but wait, there is a cool trick it can do...Hit your sustain note or big chord, then slide your right palm down there and pump it for the coolest vibrato!

I don't like the weight of this thing hanging around my neck. It's one heavy piece. I know that comes with the territory, but it gets a little rough after 45 minutes. I'm always happy to slip it off and switch to my comparitively featherweight Strat for a while. (But I'm also just as happy to slip it back on when it's time to roar).

The only sad thing about this guitar is I paid nearly full price for it, only to have the whole DeArmond line sell out for dirt cheap this summer (01) and I DIDN'T HAVE THE MONEY TO BUY MORE!!!! Now that people have 'discovered' how awesome they are, there won't be many good deals out there.

I have been amazed at the quality construction, hardware and finish of this guitar. It stays in tune, and the tuners are really smooth to operate. This thing stays on a stand in my house where everyone picks it up and noodles on it. I cringe sometimes when my teenager's oafish friends start to go Townsend on it, but it never complains. Hasn't picked up a single nick or scratch.

I probably shouldn't give a five rating because, after all, this is an import guitar. And I really have a problem qualifying my rating by saying it's a five "for the money", since I honestly think if this guitar had cost double or triple what it did, I'd STILL be very happy with it. So five it is.