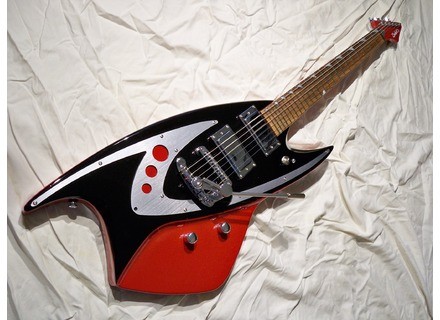 Value For Money : Correct Audience: Anyone
Features
The Backlund 400 DLX has a mahogany body and neck with a polyurethane finish (it comes in blue, black or red, whereas the model I’m reviewing is red). It is the ‘deluxe’ model as it comes with a tremolo arm/bridge not found on the regular Backlund 400. Weighing 7.5 pounds (3.4 kg), its body shape is unlike any other and has design elements that crosses vintage with modern.

The mahogany neck (24.75-inch scale) has a rosewood fretboard with a soft-C shape. The fingerboard radius is 14-inches (350mm), with 24 medium jumbo nickel frets, mother-of-pearl shark teeth position (aka ski slope) markers and a 1-5/8” carbon nut. The two-piece plastic guard (more a design feature as opposed to an actual pickguard) has a brushed metal-looking finish atop a two-toned, beveled body. The bridge is a Duesenberg Tremolo System that has a similar ‘range’ as a Bigsby, viz., two semi-tones up or down (with flat edges on the bridge for better comfort while palm-muting). There is a slight neck heel bevel to the neck (upper frets are relatively easy to access).

The neck and bridge pickups are both medium output passive custom wound double coil humbuckers. The electronics (volume and tone) are quiet, as is the 3-position switch. The jack cover is a countersunk Telecaster style. There is a Volume and Tone control, and the 3-toggle switch (with silver tip to match the hardware) that selects bridge humbucker, bridge + neck tapped or neck humbucker). The machine heads are Wilkinson tuners and the hardware is chrome. The Buckland 400 DLX does not come with a gig-bag or case, but there is an option for a case (the guitar’s shape/length suggests that a gig-bag would not be available). An Allen-key set was included for truss-rod, vibrato arm and knob adjustment.

Sound
The pickups have a bell-like and clear quality that accentuates the harmonics and note definition. They are sensitive to touch and produce a good deal more volume when the guitar is picked hard versus softly, being ideal for those who like to include a lot of dynamics in their playing. I would classify the pickups as mostly midrange output, since neither bass nor treble tend to accentuate as much or to excess. There are three variations in pickup selection via a toggle switch, each with a variation on a full-bodied tone. In essence, when switching from a bridge to a bridge/neck tapped the same tone can be heard with a transition from high-mids emphasis to mids; and then switching from bridge-neck tapped to neck there is more emphasis in low-mids. Even with these differences it is apparent that you’re hearing the same pickups (likely since the neck and bridge pickups are the same custom wound pickups). The Volume control rolls off slowly, although there is a decent difference with only a partial turn (from full to down slightly), thus making it very good when rolling off higher-gain and distortion (between lead or heavy crunch to a moderate crunch). The Tone control has a good range, and when rolling the treble off completely the bridge pickup sounds very much like the neck pickup. The split-pickup selection has a similar reaction, sounding deep enough and similar to the neck pickup with the tone rolled back completely. Interestingly, the neck pickup sounds only a touch darker (more bass) with the tone rolled back completely.

Action/Fit/Finish
No adjustments were required – a solid setup. Pickups were adjusted at a reasonable height with chrome pickup rings to match the pickups. There were no flaws in the paint (bubbles, streaks or consistency issues), the neck is smooth with the same red polyurethane throughout. The paint separation or edging (between black and red) is straight and without quality (bleeding) issues. The neck heel has a modest and smooth carve (no armrest or belly contour, although comfortable to play). The carbon nut has a good cut/finish, the frets well dressed (a slight bevel or roundness to their edges), and the tuning pegs have a solid feel when turned.

Reliability & Durability
This guitar plays well and sounds as good as it looks (although its look certainly succumbs to a particular taste). It is in the higher priced instruments among the Eastwood collection, but the detail and construction is not typical and is a show-piece as much as it is an instrument to be played. The Wilkinson tuners feel solid, the volume/tone knobs are steel, the strap buttons well-secured and of a good size and contour/shape, and the pots are quiet and feel of good quality when turned. All aspects to this deluxe guitar are up to standard for a quality instrument, as they should be for the price. The frets are nickel, which means faster wear than stainless steel, which is one of the minor downfalls for a guitar of this caliber.

Overall Impression
Designed for Rock ‘n Roll, the Backlund 400 DLX is good also for softer Rock to Hard Rock. It can get through Metal fairly well (not as good as guitars made for Metal), which is good considering its looks (you can’t argue that it may look retro in some respects, yet has a very modern appeal). The pickups do cut through the mix when combined with high-gain gear, and certainly pickups can be swapped if a higher output is preferred. At a price of $1479 USD the Backlund 400 DLX is a bit pricey, but no more so than a good Stratocaster or Les Paul Standard. And if you like the Backlund design, then there are no substitutes. It certainly plays extremely well (good neck feel and low action), it has a nice finish and fret-work, and it sounds good with various types of gear, from distortions, overdrives, modulations, etc. For its price range I would like to see locking tuners and stainless steel frets; as well, the tremolo arm is not meant to be a ‘whammy’ bar, as being too aggressive tends to loosen the arm within its housing (held in place with two Allen key [hex] screws), besides having a range of only a few semi-tones, viz., it is a VIBRATO or TREMOLO arm. In a seated position a person’s thigh tends to be in the way of the tremolo arm at times – however, due to the design of the Backlund 400 DLX you can play it in a classical seated position (similar to a Strandberg and other such guitar designs), and doing so allows for better tremolo clearance.