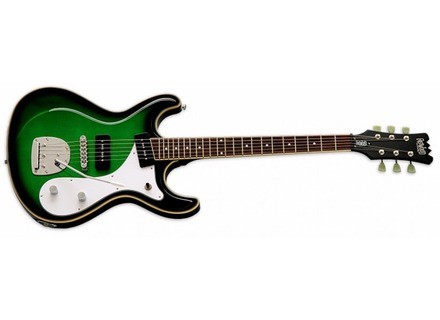 Sidejack DLX, Other Shape Guitar from Eastwood Guitars in the Sidejack series.

View other reviews for this product:
The overall feel of the Eastwood Guitars Sidejack DLX is outstanding, as the action on the one that I played was incredibly low and very easy to play. Playing up and down the neck isn't an issue, as it in general an easy guitar to play. The guitar is definitely on the smaller side because of the small body, and is pretty light because of this. In my time using the guitar I've found it very easy to get a full bodied sound with a lot of character.

This guitar is probably most often used for rock and alternative music, as it definitely has the Kurt Cobain connotation attached to it. I've used the Eastwood Guitars Sidejack DLX for recording with a '76 Fender Twin Reverb and a variety of pedals including an Ibanez Tube Screamer overdrive, a Boss CS-3 compressor, and a Line 6 DL-4. Even when used without any pedals or effects, the sound I got was instantly impressive both as a lead and rhythm guitar. I would say that I like it best as a rhythm guitar because is really sounds full bodied when you play barr and power chords, but it is suitable for any type of use.

Overall, I'm definitely an advocate for this guitar. As any guitar player knows, Eastwood has an incredible line of guitars, and this Sidejack DLX is just another flavor that they have to offer. I don't believe that there are too many Fender Mustang Reissue '69's out there since I believe that they were only made for a short while. I don't know how well this matches up to the other Eastwood’s either since I haven't tried them. I would imagine that the price of this is somewhere in the middle, but it probably varies since it isn't the most readily available. If you're into Eastwoods and come across one of these, I'd definitely encourage you to do a double take.