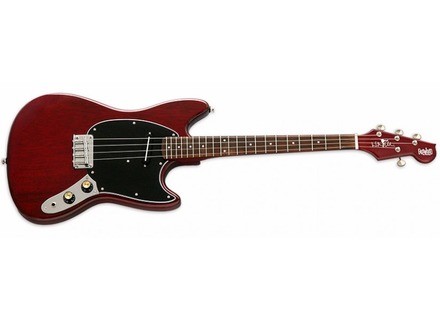 Handle very nice.
The string spacing is unsettling at first, when you're a guitarist, but we made it fast.
Perfectly balanced with a strap.
Chouilla a cheap mechanical, for any flat.
No unwanted detuning but there as latency when I reach the ropes and suddenly, it lacks precision.
The action is pretty high from the factory and it went down in the luthier for everything.

It sounds pretty Telecaster with single coil sound.
My HOT ROD is a pleasure to make it sound, by passing through a Tube Screamer and a reverb pedal.
We must experiment with open-tunings available and God knows that there ...: GCEA ukulele tuning, GDAE violin or banjo in CGDA.
Personally, I'm stuck on the GDGC, which opened the doors of creativity!
The top is for use with these tunings and a nice distortion. Harmonics that you get with the feedback are quite "unusual" (in the first sense).

My first tenor guitar, I did not see, I heard listening to the first albums IDAHO.
Jeff Martin used this type of four-stringed instrument, built at the time by a California luthier named John Carruthers.
I've always been crazy single Jeff and his accomplice John Berry-both-ténoristes had.
Bargeots tunings that allow this guitar are open to creativity and fairly unheard harmonics (first sense) door, once the distortion engaged.
Jeff Martin did not consider himself as a guitarist (very good pianist, by against) and therefore it has always experimented with his tenor, without actual or technical background of "scratch". This spirit of adventure I like.
Here ... for years, I continued to listen to this band, playing guitar 6 strings with different kinds of open tuning and do not see it under my nose any tenor guitar that I can grasp.
It was during the summer of 2013 I learned Eastwood guitars out his tenor model, designed in collaboration with Warren Ellis, guitarist / violinist Nick Cave. He plays in their Grinderman project.
Wooooow! I threw at me from a French retailer has proposed and it never left me since.

I have better understood since this "spirit of adventure" that I mentioned above, with a small pioneer side as I feel like figure alien when I "door" this tenor shoulder.

People that call me tell me:

Even the luthier who I brought to adjust the action had never seen and kept a little longer to make a try buddy!

If I had to buy one, I would jump on their new model that couples the single coil with a mini-humbucker ... I think this is the ultimate style!
See the source
Did you find this review helpful?yesno
Cookies help us improve performance, enhance user experience and deliver our services. By using our services, you agree to our use of cookies. Find out more.