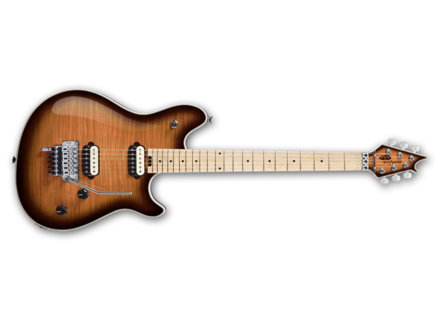 Wolfgang USA, Other Shape Guitar from EVH in the Wolfgang USA Series series.

It was during the 2007-2008 Van Halen tour that the all-new EVH Wolfgang guitar went through extensive live "road testing" performance trials. The tour kicked off in fall 2007, and Eddie punished early versions of the new Wolfgang each night; playing every updated prototype onstage under the full, unfiltered spotlight of his fans. The results are reflected in the EVH Wolfgang guitar; produced to Eddie's exact specifications and with features identical to the Wolfgang guitars he records and performs with.

The Shape of Music

"Every aspect and component of this guitar has been examined and upgraded to the highest standards possible: stainless steel frets, double-potted custom-wound pickups, five-piece binding on the matching body and headstock, custom-made signature tuning machines and Floyd Rose® bridge, new low-friction pots, and the list keeps going... we left no stone unturned," said Eddie. "Everything that I've built, destroyed, stumbled onto, learned and experienced is in this guitar."

When Eddie Van Halen made his debut into the rock music scene in 1978, he did so with a homemade guitar (later known as "Frankenstein"). At a time when his monster technique and tone demanded a high-performance, indestructible guitar, he created his own to reach his own seemingly impossible standards. For over 35 years, he has continued to examine and improve every variable within the instrument, all culminating with the new EVH Wolfgang guitar.

For more information, visit their web site at www.evhgear.com.