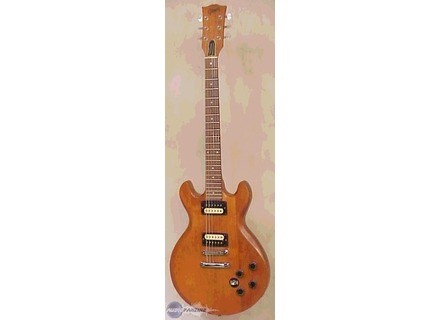 Value For Money : Excellent
View other reviews for this product:
Trs rare manufactures in the USA under the direction Norlin, this guitar dcline silent in many shapes, Les Paul, SG and 335. Only changed the form of electronic silent on all the same. Two dirty fingers, a well located selector bottom right, bottom (to make ECONOMY perage wire and a hole in supplmentaire left as the other Les Paul or SG non-economic .

The handle is the highway of heaven, the frets are wide and flat enough that the little rubber finger placement errors. The double notches with a set neck allows a CASC easy to treble. Form 335, it has widened the rear body, allowing it to push the shape of your chest, or your gut depending on where you place it to play. As is lighter than a Les Paul, less than 335 Paisse ES, it is idalie for scne. The dirty fingers as they are excellent for playing Led Zep. You hit twice agreement MI enchantment and you riff on the Good Time Bad Time, all the hairs stand up on the forearm so the sound is excellent, even better than on disk.

As the microphones are powerful It is not necessary to always use donf. The sound is even better, I play this guitar on a Marshall 8080 for Stairway to Heaven, the sound is fabulous when GRNE clear agreements and when necessary to pass the game LA SOL FA is mounted volume of 7 10 and not need pedals sound is l.
I also use it as a jazz guitar, with only one serious micro VOX AC 30, it's hot and beautiful. I dj duo on a jou TWIN REVERB with collgue who had a LES PAUL STANDARD, he silent impossible to know what his guitar playing so the resemblance between the two is perfect.
I never use the microphone only acute, mostly intermdiaire is in position I play.
Can not play with this SYKES John skyscrapers, but the cons for LED ZEP ZZ Top or ..... is the top.

I bought this guitar in a store that she kept her silent activity FRS 5000 I got 50% or 2500 FRS is one of the best investment of my life. Sounds fabulous setting for a relatively small, has had two months of rent when the era (instead of 4). I have many other guitars, FENDER: Lead, Stratocaster, Gibson, Les Paul, Corvus, Challenger, Victory. All these guitars have spcificits particulires. But the one I prfre among all is the 335 S, Premire in form, less than the form Galvaude LES PAUL, and its his character that has a rel re.
For me it's the guitar that every guitar player should have in its range, not too CHRE, handy, good sound.
See the source
Did you find this review helpful?yesno
Cookies help us improve performance, enhance user experience and deliver our services. By using our services, you agree to our use of cookies. Find out more.