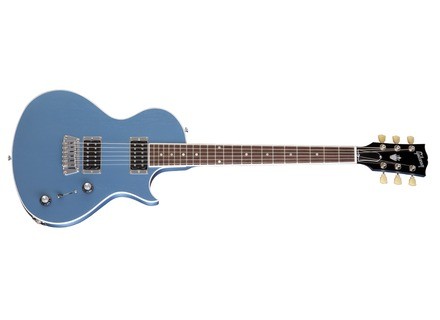 Nighthawk Studio, Other Shape Guitar from Gibson in the Nighthawk series.

View other reviews for this product:
The Gibson Nighthawk was one of Gibsons later attempts to get more of a Fender sound. They usually came with a crazy pickup setup with a mini hum and a single coil and whatnot. This is the new Studio Nighthawk model so it retains the base Nighthawk feel with a simpler layout for the electronics. The Nighthawk has a strange look to it since the body is a bit smaller and the neck is the longer 25.5 inch scale. The body is made out of Poplar for a more Fenderish sound as well. The set neck is mahogany with the thin 60s profile. This model has a simple gold top finish. The tuners up top are standard Klusons. The bridge is the old Nighthawk bridge which is kind of like a Fender style hardtail. The pickups are a set of Burstbuckers and the controls are a volume and tone with a 3 way blade switch.

This guitar was designed to have a different feel than a Les Paul. It was another attempt to get more Fender players over to Gibson. With the longer scale there is more room to breath on the fretboard. If you have big hands and find your fingers getting bunched up on a normal Gibson neck this might be the Gibson for you. The cutaway is also larger for good upper fret access. The bridge is a bit different than most Les Pauls. It is a string through Fender style hardtail. The string through design gives you a bit more sustain.

Being the Nighthawk studio it is more inbetween a real Les Paul and a real Nighthawk. While the real Nighthawk has an assortment of pickups this guitar has a standard dual humbucker set. This guitar has a set of burstbuckers which I normally do not prefer but work well in this style of guitar. Poplar is very similar to alder. Most guitar companies who use Alder would probably use Poplar if it looked better and was cheaper. With this kind of tone wood you can a more high end strat type sound. This combines well with the Burstbuckers to give you more twang than you would get on a Les Paul. The twang is all around and evident with this guitar. The bridge gives you a bit of sustain and lets the Poplar tone soak in to the sound.

This model might do better than the normal Nighthawk models. This guitar sells for less than 1000 dollars and has a familiar electronics setup. The normal Nighthawk guitars have a pretty crazy electronics setup that might scare some people off. This guitar can ease them into Nighthawk owner ship. It does what it was designed to do. It has a more Fenderish feel and sound while retaining the Gibson construction techniques. If you are a Fender guy and want a Gibson you might want to check one of these out. If you are a Gibson guy who wants a bit different tone in your lineup you can also check this guitar out. Something different isnt always something bad.
Did you find this review helpful?yesno