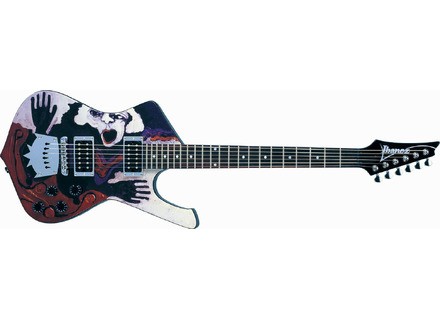 DMM1, Other Shape Guitar from Ibanez in the Signature series.

View other reviews for this product:
I do not have exact CHARACTERISTICS
I just know that the picture had appeared awful (but it's got to histroire) but also damn wrong, I really felt that he had placed the t as hard varnish.
So I would leave an average score of 7.

I tried it in store:
- Channel not great but not horrible, it dpend srement gots.
- ACCS to acute with little difficultbr /> - Ergonomics classic except that the head looks, but we suspected it, seeing its shape.
- The knobs seem effective.

As mentioned above I tried on in store so I do not know what amp.
What I remember is that the price of the guitar, could be expected at its best. Dception for myself when I branch.

What is the most nerva with this signature is that it s not hold water. In gnral signatures, despite popular belief, are great guitars, even the old warlock mick thomson signature MODEL, although one can not think s'empche ct in marketing of this signature slipknot, silent a good guitar. The one faces a signature Daron Malakian who score in the 500 euros o 300 One would have thought. For me it's the price I ESG, the price the chopper can be a Ic-400 Iceman used if one seeks a little (and even less than I had seen a 450), and it was a good little guitar for vritable little super glue to him microphones.
So I think that this guitar is really a waste of money. Must really be addicted System to blame (I prcise But I like that system and I also like the Iceman, of the fact that Paul Stanley of Kiss were great)
See the source
Did you find this review helpful?yesno
Cookies help us improve performance, enhance user experience and deliver our services. By using our services, you agree to our use of cookies. Find out more.