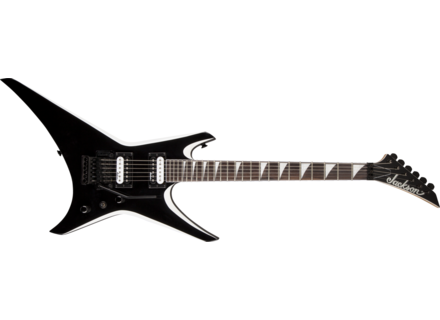 JS32 Warrior, Other Shape Guitar from Jackson in the JS series.

The Warrior body shape never really caught on for whatever reason, but if you're one of those who wants to have a fairly unique shape without having to spend a ton of money, the JS32 Warrior is what you're looking for. The guitar features an alder body, a maple neck with a rosewood fretboard, 24 extra jumbo frets, sharkfin inlays, a licensed floyd rose bridge, two humbucker configuration, one volume, one tone and a three way switch.

The guitar is decent, but that's about all I could say about it. The fretwork on this was a bit iffy. It wasn't the worst I've seen from Jackson, but it also wasn't the best. The ends were a bit sharp, but they're easily correctible with the proper file...assuming you have that file. If not, Stew-Mac sells it. The frets also weren't perfectly leveled, but it was average for the most part. The frets themselves needed to be beveled a bit more. They were slightly flat, and it was causing some issues for me. The bridge on this is a real cheap floyd rose, and it's not nearly as good as the higher quality floyds out there.

The pickups in this guitar are obviously some sort of EMG clones, but they're nowhere near as good sounding as EMGs are. The bridge itself is a very high output pickup, but it sounds a bit uncontrollable and thin. The bridge never sounded beefy enough to do some huge rhythms, and it was never quite tight enough to do those super quick start/stops in death metal. The neck was too bright for me, and I couldn't get the lead tone I wanted out of this thing. I guess it was similar to having two low quality EMG 81s in it, but again, it's nowhere near as good as EMGs. Replace them if you're going to keep this.

The guitar is average. That pretty much sums up this entire model, and it's hard for me to recommend it because of so many other great guitars for cheap prices out there. The one thing this has going for it is its extreme body shape, but there's an Ibanez guitar that looks very similar to this. There's also the Vigier Marilyn, but that's probably out of most people's price range.
Did you find this review helpful?yesno