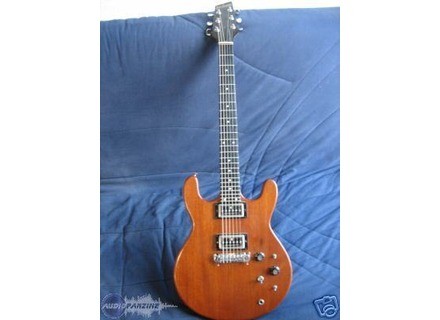 JD 80, Other Shape Guitar from Jacobacci.

JD 80, as its name suggests, began to be produced in Paris in the early 80s (see 1979) by brothers Jacobacci, the most famous French luthiers, after a trip to the USA where they brought the type humbucker pickups Alex Axe brand that fit most JD 80. Others are mounted with the famous Golden Sound Benedetti.
It is difficult or impossible to define all as a result of their craftsmanship, these guitars were assembled "a la carte" according to the wishes of clients.
They are all solid body type, mine is zebrano, exotic wood very heavy. The table consists of two slices stuck in the thick, double cutaway. I have seen some whose table was in Mahogany.
The neck is Mahogany 24 cases. It is glued to the table without any shoulder which allows access to acute unbeatable. The key is ebony. Schaller mechanical oil bath for chrome mine. It has two humbucker Alex Axe very powerful. A 3-position selector neck / neck + bridge / bridge. She was fitted with two volumes, a tone that I made a change in volume, 2 tones. The microphone is acute splittable. The JD is 80 and above with a built-in preamp powered by a 9v battery. The bridge is a Leo
Quan Badass.
I put a 9 for the general face of the beast, not very sexy ...

The handle is round and fits comfortably in your hand. The low action and ebony fingerboard allow rapid movement.
As I wrote earlier access to acute is the best I know.
The guitar is great on the knee, the absence of contour-type Stratocaster body contrasts with the high-tech side of the bucket (at the time ...). The weight is however painful to the shoulder end of the concert, even with a wide leather strap!
The sound palette is very extensive, very clear sounds of Jazz in neck position with powerful treble distortion. I put a 9 because of the weight ...

I often have a guitar that is a group that I play / have played. I used the JD at the beginning of my group the precarious where it adapted very well to Rock / Blues / Ballads we played. I also played with JAZZ APERO where she defended herself well.
I then played on a Gallien Krueger. I then spent a Hughes & Kettner Tour Reverb richer in sound with its 3 channels and reverb. I recently bought a Fender Hot Rod Deluxe when it revealed a more jazz than ever, round and dull.
I have been back to my first love: the Stratocaster! The Jaco stays at home.

I have for ten years now. I paid 1000 francs at the time with a 40W amp! I recerchais guitars of this brand because I already had a Studio II which delighted me. I hesitated to buy it because I found it ugly. I found it far superior to the versatility GIBSON, although similar in constitution. This is a guitar very powerful, very versatile, very fast to the handle and its characteristics (24 cases, active electronics ...) seems to me quite innovative for its time.
See the source
Did you find this review helpful?yesno
Cookies help us improve performance, enhance user experience and deliver our services. By using our services, you agree to our use of cookies. Find out more.